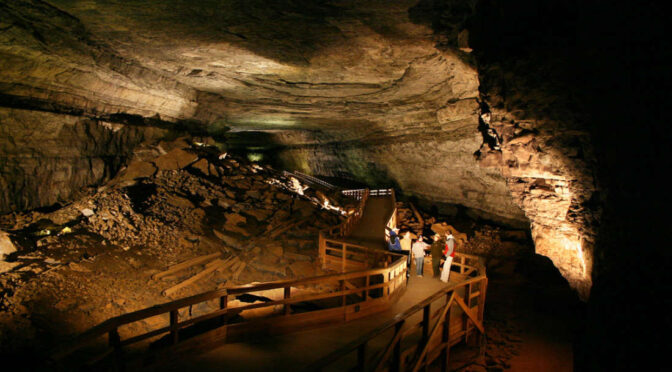 A fossilized shark head dating back some 300 million years ago has been discovered in the walls of a Kentucky cave. Experts believe it belonged a Saivodus striatus, which lived between 340 and 330 million years ago during the Late Mississippian geological period.

The well-preserved head shows the creatures skull, lower jaw, cartilage and several teeth. Based on the dimensions, the team believes the animal was similar in size to our modern-day Great White shark.

It was first spotted in a treasure trove of fossils by Mammoth Cave specialists Rick Olson and Rick Toomey, who sent images of their findings to Vincent Santucci, the senior palaeontologist for the National Park Service in Washington, D.C., for help with identifying the fossils.

But it was palaeontologist John-Paul Hodnett who made the exciting discovery.

‘One set of photos showed a number of shark teeth associated with large sections of fossilized cartilage, suggesting there might be a shark skeleton preserved in the cave,’ he told the Journal.

The head was well-preserved in the cave and the team was able to make out the shark’s skull, lower jaw, cartilage and numerous teeth.

Based on these features, Hodnett believes the shark was about the size of a modern-day great white. The Mammoth Cave National Park holds a trove of ancient fossil – more than 100 hundred shark species have been discovered so far.

A discovery such as this is very rare, as cartilage does not usually survive fossilization.

However, shark teeth are commonly found, as they are made of bone and enamel, making them easy to preserve.

Hodnett said teeth and dorsal fins of other shark species are also exposed in the cave ceiling and walls.

A separate exudation found teeth that they believed belonged to the largest prehistoric shark that lived over 2.5 million years ago.  The discovery was made by divers in an inland sinkhole in central Mexico supporting anthropologists’ theories that the city of Maderia was once under the sea.

Fifteen dental fossils were found in total with thirteen of them believed to belong to three different species of shark, including a megalodon which existed over 2.5 million years ago.

According to the researchers involved, an initial exam of the thirteen shark dental fossils and their size and shape revealed that they might have belonged to the prehistoric and extinct species of megalodon shark (Carcharocles megalodon), the mackerel shark (Isurus oxyrinchus) and the saw shark, the last two of which are not extinct.

Reports state the Xoc cenote is the largest in the city of Merida with a diameter of 2,034 feet and 91 feet deep.