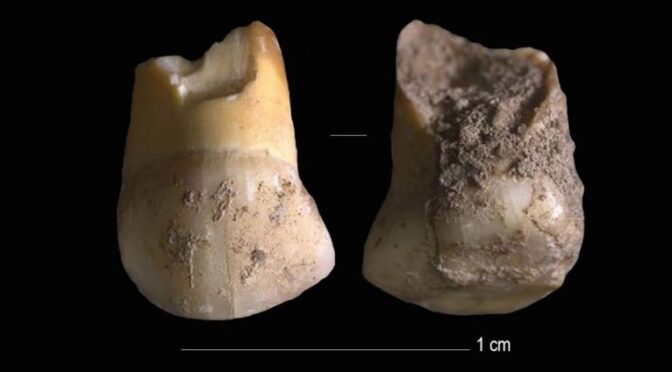 A 48,000 years old tooth that belonged to one of the last Neanderthals in Northern Italy

A milk tooth belonging to one of Italy’s last Neanderthal children has been found near Venice.  The canine tooth belonged to a pre-teen, likely 11 or 12 years old, and dates back 45,000 years.

Neanderthals went extinct around 40,000 years ago after being out-competed for food and shelter by the more intelligent Homo sapiens.  The tooth would have been in the upper row of teeth on the right-hand side of the child’s mouth.

It was discovered in a rock shelter at an archaeological site called ‘Riparo del Broion’ on the Berici Hills in the Veneto region, near Venice. The tooth is the first-ever human remain to be found at the site.

Genetic analysis of mitochondrial DNA preserved inside the tooth, as well as analysis of the enamel and shape, reveal it is from a Neanderthal and not a Homo sapien.

Matteo Romandini, lead author of the study at the University of Bologna says: ‘High-resolution prehistoric field-archaeology allowed us to find the tooth, then we employed virtual approaches to the analyses of its shape, genome, taphonomy and of its radiometric profile.

‘Following this process, we could identify this tooth as belonging to a child that was one of the last Neanderthals in Italy.’

Mitochondrial DNA is similar to normal DNA, except it is smaller and stored in the mitochondria, the powerhouses of human cells, not the nucleus.

It is also inherited only from the mother and therefore paints a picture of maternal heredity.  The owner of this tooth had a mother who was descended from Neanderthals that had lived in Belgium, the DNA revealed.

‘This small tooth is extremely important’, says Stefano Benazzi, professor at the University of Bologna and research coordinator.

‘This is even more relevant if we consider that, when this child who lived in Veneto lost their tooth, Homo Sapiens communities were already present a thousand kilometers away in Bulgaria’.

The early findings are published in the Journal of Human Evolution and researchers are still delving through the other findings the archaeological site has revealed.

For example, there are many signs of hunting and that the site was used to butcher large animals.

‘The manufacturing of tools, mainly made of flint, shows Neanderthals’ great adaptability and their systematic and specialized exploitation of the raw materials available in this area’, adds Marco Peresanti, a professor of the University of Ferrara who contributed to the study.

Neanderthals first arrived in Europe around 350,000 years ago and lived without rivals until around 45,000 years ago, when Homo sapiens first ventured into Eurasia.

When Homo sapiens — modern humans — moved into Europe they hunted the same animals and sought the same plants to survive a Neanderthals.

This proximity led to mingling and even interbreeding, Neanderthal DNA can be found in modern-day humans to this day.

It is believed the two species managed to co-exist for around 8,000 years, but the competition over limited resources led Neanderthals to extinction at some point between 43 to 38 thousand years ago.