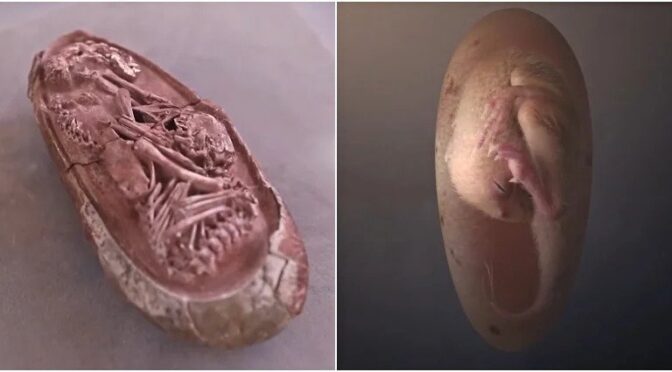 A dinosaur embryo perfectly curled up in its fossilized egg was analyzed by a team of researchers in southeastern China.

The rundown: The fossil, estimated to be between 72 and 66 million years old, belonged to an oviraptorosaur — a beaked, toothless and omnivorous theropod that existed during the Cretaceous Period of what is now Asia and North America.

Researchers published their findings in the journal Science.

The embryo was estimated to be 27 centimetres (11 inches) long from head to tail. Researchers said the dinosaur, which would have fed on plants, would be 2-3 meters (79-118 inches) long had it lived to adulthood.

The embryo was close to hatching as evidenced by its “tucking” posture, a behavior seen in modern birds. Chicks preparing to hatch tuck their heads under their right wing for stability as they crack the shell with their beak.

Modern birds are direct descendants of theropods, which are two-legged dinosaurs. Theropods include the Tyrannosaurus rex, spinosaurus and velociraptor, among others.

What the researchers are saying: Due to its complete structure, the fossil turned out to be one of the best dinosaur embryos found in history, the researchers told AFP. They called the creature “Baby Yingliang” after Yingliang Stone Nature History Museum, its current location.

“This skeleton is not only complete from the tip of the snout to the end of its tail; it is curled in a life pose within its egg as if the animal died just yesterday,” study co-author Darla Zelenitsky, an assistant professor of paleontology at the University of Calgary, told Live Science.

Lead author Waisum Ma, a vertebrate paleontologist at the University of Birmingham, said dinosaur embryos happen to be some of the rarest fossils. Most non-avian embryos are also incomplete, with bones separated at the joints. “We are very excited about the discovery of ‘Baby Yingliang’ — it is preserved in a great condition and helps us answer a lot of questions about dinosaur growth and reproduction with it,” Ma said. “It is interesting to see this dinosaur embryo and a chicken embryo pose in a similar way inside the egg, which possibly indicates similar prehatching behaviours.”

The researchers said the embryo was found in Jiangxi province and acquired by Liang Liu, director of a Chinese stone company called Yingliang Group, in 2000. It was stored and forgotten until museum staff found it some 10 years later, during the construction of Yingliang Stone Nature History Museum, according to CNN.

Embryos that don’t adopt the tucking posture are more likely to die as a result of unsuccessful hatching. The team plans to study the fossil further using advanced scanning techniques, since part of its body remains covered by rock.