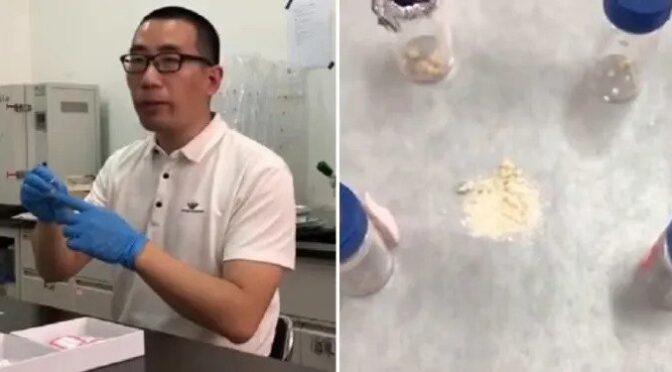 Chinese researchers have unearthed bronze containers with lead white residue that the ancient Chinese used for face-whitening makeup around 300 years before the ancient Greeks started making their own.

A team of researchers from the University of the Chinese Academy of Sciences (UCAS) and the Shaanxi Academy of Archaeology discovered the ancient artefacts at the Liangdaicun site in the city of Hancheng in China’s Shaanxi Province.

In their study published in the open-access journal Humanities and Sciences Communications on Sept. 3, archaeologists noted that the area they excavated in the Liangdaicun site was a nobility cemetery that belonged to the Rui state of China from 770 B.C. until 476 B.C.

Scientists unearthed several valuable artefacts from the cemetery, including the tomb of an aristocrat from the Rui state and miniature bronze containers in her tomb containing synthetic lead white. Upon studying the containers and their contents, the researchers concluded that they were used for cosmetic purposes.

“The results show that these residues were the earliest synthesized lead white in the world to date, which was produced by the precipitation method in solution distinct from the corrosion method practised in ancient Greece,” the scientists wrote.

Before the recent discovery, it was believed that ancient Greece was the first civilization to use synthesized lead white.

The study noted that the earliest known method to obtain lead white was through mining natural cerussite, which was recorded in southern Europe, Egypt, Iran, Mesopotamia and the Indus Valley between the fifth and second millennium B.C.

Ancient Greece did not start employing a corrosion process for synthesizing lead white until the fourth century B.C. Mass production and the widespread use of lead white in cosmetics and art across Europe soon followed.

“The mass production of synthetic lead white with lower cost promoted the widespread use of white makeup in China and the Mediterranean World, which triggered a cosmetic revolution and highlighted that the pursuit of beauty stimulated the development of chemistry in human history, especially the earliest wet chemistry practice in China,” the study read.

Although the recent study claims that the use of synthesized lead white was first evident in China, it noted that ancient Greece and China had different approaches.

“The synthetic lead white found at the Liangdaicun site was several hundred years earlier than that of ancient Greece, and both regions have different synthetic approaches, indicating the independent origins and development of lead white synthesis between east and west Eurasia during the first millennium BCE,” the researchers wrote.

They also pointed out that the residue found in the aristocrat’s tomb could be much older than the actual tomb.

“Although the age of the lead carbonates does not fall exactly within the burial date of the tomb, it still reveals the synthetic origin of ancient samples because natural cerussite was observed to have a significantly larger offset,” the team wrote.