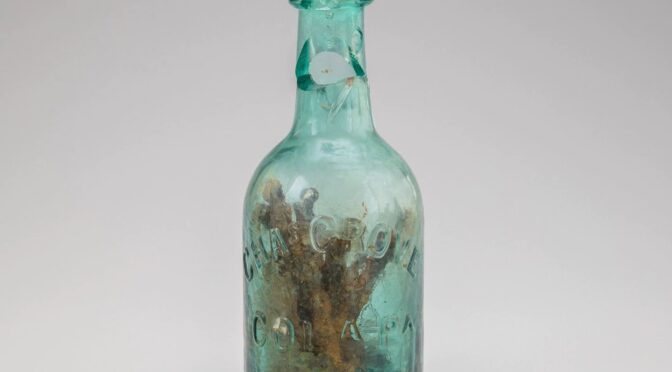 A Civil War-era ‘witch bottle’ may have been found on a Virginia highway, archaeologists say

From the College of William & Mary archeologists discovered a remarkable piece of history.

At Redoubt 9, which is now known as exits 238 to 242 on I64 in York County, the team found a Jug of the Civil War era, which was thought to be a “witch bottle.” Witch bottles served as a kind of talisman to ward off evil spirits, the university says.

The excavation was carried out in association with Virginia Transportation Department in 2016 and was supervised by the former archeologist Chris Shepard of William & Mary Center for Archeological Research (WMCAR), who now works for VDOT.

Staff thought it looked like a bottle full of junk at first.

“It was this glass bottle full of nails, broken, but all there, near an old brick hearth,” said Joe Jones, director of WMCAR, told the college. “We thought it was unusual, but weren’t sure what it was.”

Jones said that the research center works frequently and closely with VDOT and noted that the standard arrangement is for their archaeological work to be scheduled well in advance of active roadwork. This particular dig took place before the planned interstate widening project.

William & Mary says Redoubt 9 was constructed by Confederates and occupied by Union troops after the Battle of Williamsburg in 1862.

Jones says the fortification was one of 14 mini-forts built along a line between the James and York Rivers to counter the threat of a Federal assault on Richmond via the Peninsula.

Jones explained that an afflicted person would bury the nail-filled bottle under or near their hearth with the idea that the heat from the hearth would energize the nails into breaking a witch’s spell.

Nearly 200 witch bottles have been documented in Great Britain, but less than a dozen have been found in the U.S, William & Mary says.

“It’s a good example of how a singular artifact can speak volumes,” Jones told W&M. “It’s really a time capsule representing the experience of Civil War troops, a window directly back into what these guys were going through occupying this fortification at this period in time.”