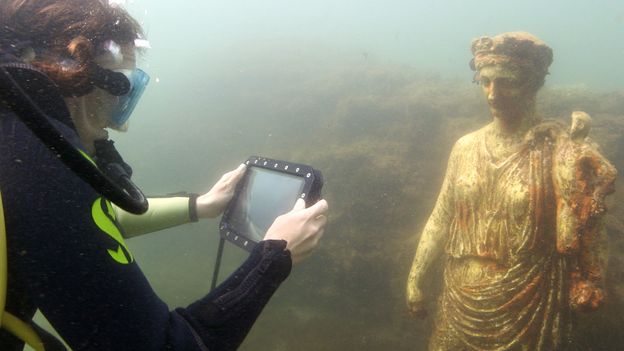 A Roman settlement at the bottom of the sea

The underwater statues at Baiae are replicas but still feel “ghostly and sublime”. “You’re sure I can cross?” I had to almost shout to be heard. Wooden slats dotted the ground before me.

About 30m to my right, steam rose into the sky in thick grey-white clouds. And somewhere between where I stood now, and there, the earth turned from solid and cool to boiling and viscous. Wherever that exact change happened, I wanted to make sure I was none too close. It’s very dangerous here “ Sì, sì, ” said volcanologist Enzo Morra, my guide for the day. He was already climbing the hill on the other side of the wooden slats before me.

I edged one foot onto one piece of wood, then the next. The ground felt firm. As I reached the far side and climbed the hilltop, I could see the source of the steam: a bubbling pool of dull gunmetal-grey mud, ominous as the contents of a witch’s cauldron and a great deal louder. The air smelled of sulphur.

“It’s very dangerous here,” Morra welcomed me when I arrived. “More dangerous than Vesuvius.” Campi Flegrei is one of 20 known “supervolcanos” on the planet I laughed nervously. “I wish you’d told me that when we were over there. Why are you telling me that when we’re here ?”

We were overlooking one of the fumaroles of Campi Flegrei, known in English as the Phlegraean Fields. One of 20 known “supervolcanoes” on the planet – capable of erupting with a volume thousands of times stronger than an average volcano – Campi Flegrei commands less notoriety than Mt Vesuvius, just 30km to the west.

But that is largely down to luck. If Campi Flegrei were to blow at maximum capacity today, it would make the 79AD eruption of Mt Vesuvius that destroyed Pompeii look like a puppy’s sneeze. Fortunately, Campi Flegrei hasn’t had a full-force eruption in thousands of years.

That isn’t to say it’s impossible. Researchers call the supervolcano “restless”, and there are concerns it is becoming more so. In 2012, the alert level was raised from green to yellow, indicating a need for more monitoring. Most recently, a “seismic swarm” in April 2020 saw 34 different earthquakes.

Campi Flegrei is more than a (fitfully) snoozing menace. It’s why the ancient Romans built one of the most magnificent resort towns on the Italian peninsula here: Baiae, famed for its hot springs and bad behavior.

It’s also why at least half of the town, with its precious marbles, mosaics, and sculptures, sank beneath the Mediterranean over the following centuries. Now, this “restless” supervolcano is the reason why much of this archaeological site is at risk today – both indirectly, thanks to the sea’s effect on the artifacts, and directly, in terms of the threat of earthquakes or another volcanic eruption.

The Romans had few ways of knowing when an eruption or earthquake was coming. They were all but helpless when it came to protecting their town against the encroaching sea. But that’s no longer true. Today, a team of archaeologists and engineers are developing some surprising new technologies to protect the underwater site for future generations. And that’s what I’ve come here to learn more about. Lured by the volcano’s hot springs, the Romans built the magnificent resort town of Baiae here (Credit: Amanda Ruggeri) Over its full 13km radius, the supervolcano, almost all of it at ground level or beneath the sea, has 24 craters and more than 150 pools of boiling mud. It’s easy to see how the ancient Greeks, who settled here first, came up with the name: “Phlegraean Fields” is from the early Greek verb phlégō (“to burn”).

The danger of Campi Flegrei isn’t just its size and strength, but its randomness. When a volcano-like Vesuvius erupts, you know where the eruption will come from the cone at its peak. Not here.

Another danger is the type of activity: more than 90% of the activity Campi Flegrei is explosive, not effusive. In other words, when it blows, it won’t leak lava over the ground; it will punch a column of rock and lava into the air. When the detritus lands, the ash will blacken the sky and thicken the air, making both seeing and breathing near-impossible. The column’s collapse causes a pyroclastic flow: extreme heat of up to 700C that vaporises everything in its path.

That, at least, is what happened 39,000 years ago, the date of Campi Flegrei’s largest eruption. Molten rock spewed 70km high. Ashes were found as far away as Siberia. The explosion was so powerful, the volcano collapsed into a caldera. The cooling that occurred in the ensuing years may even have helped bring about the end of the Neanderthals.

Fifteen thousand years ago, Campi Flegrei erupted again. The eruption wasn’t as large, but it threw significant volumes of yellow tufa into the air – enough to give Naples its colour today. People carved through and built with the local stone, giving the palazzi, churches, and even underground tunnels their golden colour. The last significant eruption was in 1538. Compared to these previous two events, it was tiny. It was also big enough to throw ash and pumice 5.5km high. As the column collapsed, it created a “new mountain” (dubbed, quite literally, Monte Nuovo), measuring 123m high – and burying a village beneath it. If this happened today, in the vicinity of Italy’s third-most-populous city, Naples, the damage would be severe.

So what is the possibility of such an eruption happening in our lifetimes?

“Obviously we can’t make estimates,” Morra said, almost languidly. “We know that an active volcano, an active volcano, can erupt. Clearly, in our heart – we hope not.” I looked worried. “Have courage!” he said. “Like Vesuvius, Campi Flegrei is continuously monitored by colleagues at the Vesuvian Observatory, the oldest volcano observatory in the world. This can make us feel more tranquil.”

Close monitoring means an eruption can be predicted months in advance. With enough warning, the hope is that the metropolitan area can be safely evacuated.

Signs of a pending eruption aren’t the only data that volcanologists collect. The Vesuvian Observatory was also the first to discover, and chart, a phenomenon known as “bradyseism”: the slow rising, and sinking, of land over time. As the magma in Campi Flegrei’s massive magma chamber moves 3km below ground, so does the land above – sometimes significantly. Over the last 15,000 years, the movement of the magma has pushed the land above it upward by some 90m. At the same time, other parts of the caldera have fallen.