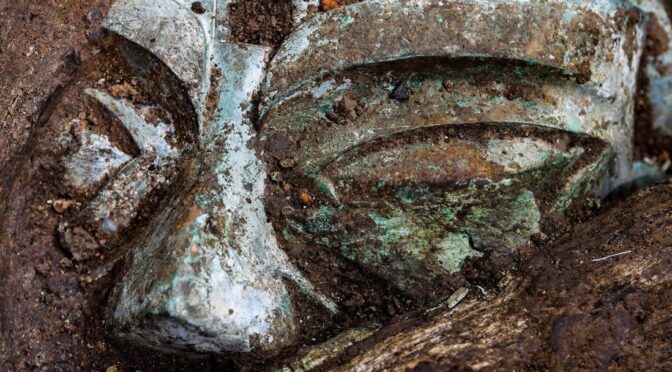 Scientists at one of China’s most important archaeological sites continue to unearth remarkable artefacts from an ancient Chinese civilisation that dates back over 3,000 years. Researchers on Thursday revealed over 500 artefacts discovered at the Sanxingdui ruins in southwest China’s Sichuan province

The findings included extremely detailed bronze statues, jade and ivory artefacts as well as a fully preserved gold mask. The new gold mask was reminiscent of one that awed the world back in March, which was far more damaged than the latest revelation. The first mask was so unique it had some people speculating that aliens once inhabited the area

Scientists told China Daily that the mask was found in June and it is consistent with the hypothesis that gold was important to people of the area, called the Shu kingdom. The gold mask is the largest, and most well preserved, of similar golden artefacts discovered at the site. It stands at 37.2cm wide and 16.5cm tall.

Scientists believe that the masks were manually shaped by ancient people and had not been melted down and poured into a cast. The mask has similar facial features to bronze statues discovered in the area. It has large eyes covering much of the face, a big nose, gigantic ears and a flat, wide, mouth.

The strange facial features led some people to suggest they were representatives of extraterrestrials, an idea thoroughly debunked by Wang Wei, the director of the Institute of Archaeology at the Chinese Academy of Social Sciences.

“There is no chance that Sanxingdui belongs to an alien civilisation. These wide-eyed masks look exaggerated because the makers want to emulate the look of deities. They shouldn’t be interpreted as the look of everyday people,” Wang said in March.

Besides the mask, other discoveries included bronze statues, a knife made out of jade and a series of artefacts made of ivory, among many others.

Scientists said the artefacts discovered at Sanxingdui had transformed the perception of the creativity and ingenuity of the people who lived in China thousands of years ago.

While scientists are confident that the pits are not the remnants of an alien civilisation, they do not know what they are. The most common hypothesis is that it was an ancient burial ground, but that idea has not been sufficiently confirmed.

One scientist, Lei Yu, a leader of the Sanxingdui dig, told the South China Morning Post in June that he hopes to find ancient text.

“Because these people could create advanced and developed bronze, there must be text in such a high level of civilisation. We need to find it,” he said.

Many of the bronze artefacts are brand new discoveries and unique to anything found before in China. They are highly detailed, with statues showcasing facial features that bear a striking resemblance to the gold mask.

The artefacts give insights into the ancient Shu kingdom, home to a mysterious civilisation that was the source of legend until the recent discoveries proved its existence. One of the artefacts revealed this week was a vessel called a zun, which is commonly found across ancient Chinese culture. It was used to hold wine.

The Sanxingdui zun features detailed birds halfway down the vase and large spirals along the base engraved with smaller spirals to add detail.

Zuns come in all shapes and sizes and are sometimes built to appear like animals. Zuns were commonly used during the Shang dynasty (1600-1046 BC), and can be found in Chinese cultures as late as the end of the northern Song dynasty in 1126.

Artefacts near Sanxingdui were first discovered in 1929 by a farmer who found jade artefacts while digging a well. But the first professional excavation did not happen until 1986 after kiln workers accidentally uncovered more artefacts.

That original excavation in the 1980s was a low-budget affair, with scientists using simple shovels to dig. They shared one camera to gather evidence and used bicycles to transport their discoveries.

Lei, who was also part of those original digs in the 1980s, said in June that, “Archaeology was difficult at that time because it was salvage excavation due to the many brick factories around. Farmers dug up soil to make bricks and we did our excavation wherever they dug.”

Today, the ruins at Sanxingdui leverage the best technology has to offer. Workers surrounded the pits with transparent walls and built a sterilised room that maintains an environment of 80 per cent humidity and 20 degrees Celsius.

Semi-permanent laboratories were built at the site so archaeologists can quickly analyse both organic and inorganic material. The rooms were designed so that scientists have minimal contact with the artefacts when they move around. The site hosts dozens of teams from across China working to uncover the latest remarkable discovery.

Chinese scientists told Xinhua they are entering a “critical stage” and expect to find an array of artefacts that change how archaeologists think about ancient China. The site is about 60km from Chengdu, the capital of Sichuan, and some scholars have said it is more important than the Terracotta Army further north in Xian.