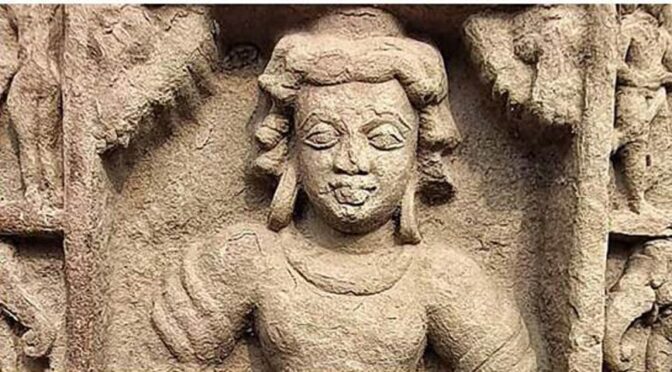 The Archaeological Survey of India (ASI) has found remains of an ancient temple dating back to the Gupta Period, 5th Century CE in Bilsarh village of Uttar Pradesh’s Etah.

At the spot, the archaeologists discovered “two decorative pillars (at the spot) close to one another, with human figurines (found earlier).”  Vasant Swarnkar, superintending archaeologist of ASI’s Agra circle said, “To understand their significance, we conducted further excavation and found the stairs,” quoted The Times of India.

Last month, the staircase was excavated has Shankhalipi inscriptions that were ” deciphered as saying ‘Sri Mahendraditya’, which was the title of Kumaragupta I of the Gupta dynasty.”

Shankhalipi is an ancient script that was used from the 4th to 8th centuries CE for names and signatures.

In the 5th century CE, Kumaragupta I ruled for 40 years over what is now north-central India.

The ASI made the discovery in Etah’s Bilsarh village, which has been protected since 1928, during a routine check-up. The ASI scrubs its protected sites during monsoons.

The Shankhalipi inscription was earlier found on a horse status found in Lakhimpur Kheri and is now at the State Museum in Lucknow, the TOI reported.

The Etah pillars are well-sculpted, better than the earlier examples in which only the lower sections were carved. The decorative pillars and staircase are a bit more advanced than the earlier ones,” said History Professor Manvendra Pundhir of the Aligarh Muslim University.

He said, “The Guptas were the first to build structural temples for Brahminical, Buddhist and Jain followers. Prior to that, only rock-cut temples were built,” quoted TOI.