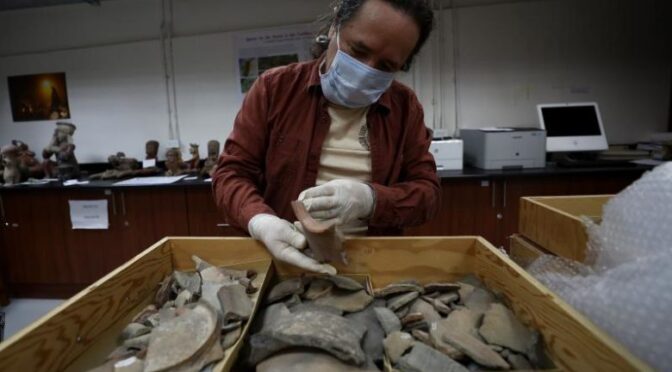 A trove of 5,000-year-old artifacts returns to Ecuador

Almost 40 years after the objects were moved to Canada for research, a series of artifacts from one of the most ancient settled civilizations in America was returned to Ecuador.

Although historical artifacts and art treasures have become fairly common in their places of origin, the current case is special because the objects were accompanied by media containing everything the scholars in Canada learned about them over the course of four decades.

The documents, pottery, gems and sculptures belonged to Valdivia Culture, which flourished between 3800 and 1500 BC in present-day Ecuador.

Besides the artifacts, the 166 crates that arrived on June 5 at San Francisco de Quito University in the Ecuadorian capital held five human skeletons.

The project began during an era when “there was not much in the way of technical-legal norms” regarding the shipment abroad of archaeological goods, Joaquin Moscoso, director of Ecuador’s National Institute of Cultural Patrimony, told EFE.

In 1982, he said, thousands of Valdivia items were taken to Canada from a dig in the southwestern coastal province of Santa Elena.

Their return to Ecuador came at the initiative of James Scott Raymond, professor of archaeology at the University of Calgary.

“They didn’t just return objects and fragments, but all of the scientific information,” Moscoso said, crediting Raymond and his team for carrying out one of the most “solid and interesting” studies of the Valdivia Culture, which was uncovered in the mid-1950s.

The work done in Canada on the Santa Elena artifacts led scholars to change some of their views on the development of settled cultures in the Americas, according to Florencio Delgado, head of the Quito’s university’s Archaeology Institute.

“Until this study, it was thought that the first populations in the New World who made ceramics were on the seacoast,” he said. “Now we know that the first ceramicists were farmers and they lived inland.”

The more than 10,000 items and fragments in the shipment from Canada include examples “of the oldest ceramics that have been found so far” on the western side of the Pacific Ocean, Delgado said.

While the abundance of feminine ceramic figures, known collectively as the “Venus of Valdivia,” has led some researchers to speculate that the Valdivia Culture was a matriarchal society.

“There are also human remains and now that it’s easier to do DNA (tests), the collection is ready for those scholars who are seeking to understand processes of settlement,” Delgado said.

Looking forward, he expressed the hope that the repatriation of the Valdivia collection from Canada will spur an effort to compile an inventory of Ecuadorian artifacts taken abroad for study.

Ideally, such an inventory would include information on the condition of the items, whether they are under active study, and if it makes sense to request their repatriation.