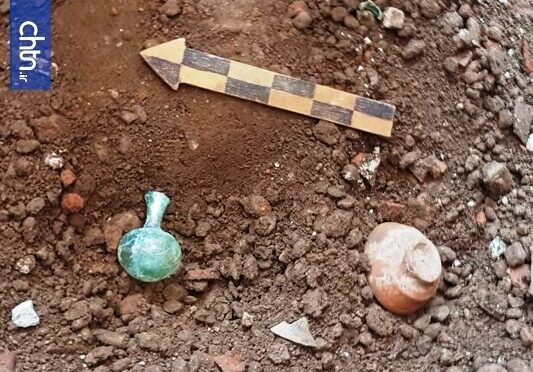 During an archeological excavation process that is currently being carried out in a century-long congregational mosque in Rasht, the capital of the Gilan province in northern Iran, historical artifacts have been discovered.

Saturday, the Deputy Provincial Tourism Chief Vali Jahani announced that “the excavations within the historic Saphi Mosque of Rasht had led to the discovery of items with historical values which appear to have been discovered below Islamic era tombs.

“A glass scent-bottle, a pottery handmade bowl, and other glassware are the objects. And the placement of these objects in the lower layers of Islamic-era tombs shows the importance of this historical area,” the official said, CHTN reported.

Earlier this month, several ancient glazed tiles were unearthed beneath the mosque while a team of restorers was digging into its mihrab.

Mihrab is a semicircular niche in the wall of a mosque that points out the qibla, the direction of the Kaaba in Mecca and hence the direction that Muslims should face when praying.

“Given that the discovered objects will be very useful in the dating of the city of Rasht, so fragments of these works will be sent to advanced laboratories in the country to obtain the absolute antiquity of the objects, and dating will be conducted via the thermoluminescent approach.”

“According to the present evidence, these historical objects discovered from the Safi Mosque belong to the Ilkanind and Timurid periods,” he concluded.

In the month of Farvardin (Mach 20 – April 19) a trench measuring 1.5 m by 1.5 m was carved in the mosque’s shabestan (an underground space that can be usually found in the traditional architecture of mosques in ancient Iran), which resulted in recognizing some additional sections.

Safi Mosque, also known as Sefid and Shahidiyeh Mosque, which is widely considered as the oldest standing monuments in Rasht, was reportedly established before Shah Ismail, the Safavid monarch, assumed power (in 1501).