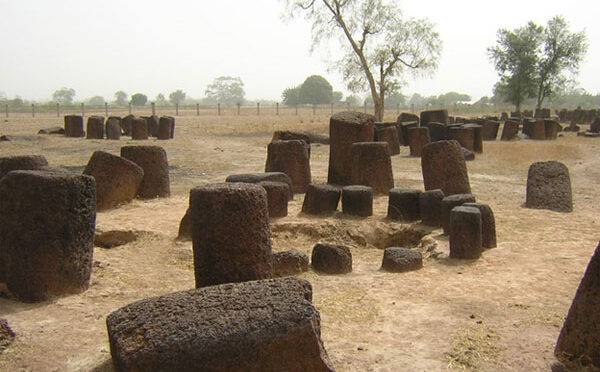 African Stonehenge – Extraordinary Stone Circles Of Senegambia – Who Were The Unknown Builders?

Throughout human history, mankind has been passionate about building impressive monuments. Very often, this is achieved by building something that is the largest, highest, longest, most expensive, etc. in the world.

Nevertheless, some less imposing monuments, rarely given the same attention, are also of great architectural and technological achievement. Take the Senegambian Stone Circles, for instance.

On average, the stones forming these circles are 2m in height and weigh up to 7 tons each. Although these are not massive structures like those of Stonehenge in England or the Great Pyramids of Egypt, the incredible feature of the Senegambian Stone Circles is that there are more than 1000 of them spread over an area that is 100 km wide and 350 km in length. Now, this is a truly remarkable achievement.

The Senegambian Stone Circles can be found in West Africa, in the modern countries of Gambia and Senegal. Of the 1000 stone circles, 93 of them have been inscribed on UNESCO’s World Heritage List.

These include the Sine Ngayène complex in Senegal, as well as the Wanar, Wassu and Kerbatch complexes in the Gambia. Apart from these stone circles, the sites also contain numerous tumuli and burial mounds.

According to the material obtained from the archaeological excavations of some of these features, the stone circles have been dated to between the 3 rd century B.C. and the 16 th century A.D. This suggests that the stone circles were built gradually over a long period of time, which perhaps reflects a tradition that was kept for almost two millennia.

To construct these stone circles, the ancient builders were first required to identify suitable lateritic outcrops for the carving of the stones. Although this stone is common in the region, great knowledge of the local geology was required to find the best laterite.

Having found the suitable laterite, one would then have to cut and extract the stone from the quarry. This was no easy feat as the stones needed to be extracted in one piece. At quarry sites, monoliths that were broken in the course of extraction were of no value and were left there.

These broken monoliths show traces of microscopic cracks which may have caused them to fragment while being extracted. Therefore, great skill was required when cutting and extracting these stones. Finally, the extracted monoliths were transported and erected at various sites along the River Gambia.

This final process suggests that there was a social organization in place that was able to mobilize the manpower required for this task. Imagine this process being repeated for tens of thousands of monoliths, and you get a sense of the massive scale of the Senegambian Stone Circles.

The function of these stone circles, however, remains a mystery to us. It has been suggested that they had a funerary function. In some of the excavations, mass burials were discovered, in which bodies were haphazardly thrown into graves.

This suggests that either an epidemic killed a large number of the region’s inhabitants or possibly that it was some kind of sacrifice. By contrast, it is claimed that Islamic writers recorded that these stone circles were built around the burial mounds of kings and chiefs, following the royal burial custom of the ancient empire of Ghana.

When Islam was introduced into the region in the 11 th century, devout Muslims were also buried in the same way, and these stone circles became sacred places. Therefore, these stone circles may have had various functions. What is certain is that more research is needed in order to better understand their function.

The Senegambian Stone Circles may not be as well-known as the more imposing monuments of mankind. Nevertheless, I think it challenges our perception of what we consider great monuments.

While we often imagine architectural feats to be one huge building looming over the landscape, the sheer number of stone circles scattered around the Senegambian landscape is a building achievement that is as impressive, if not more impressive, than some of the most famous ancient buildings on the planet.