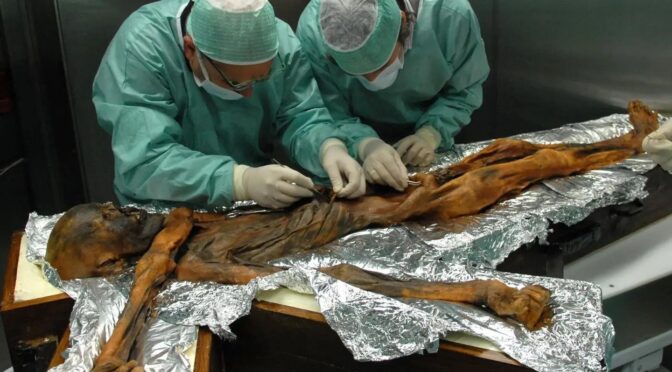 After 5,300 years, the last meal of an ancient Iceman has been revealed – and it was a high-fat, meaty feast

Some 5,300 years ago, Otzi (aka “frozen Fritz”) was murdered in the Alps with a simple one-two punch move: an arrow to the chest, and a blow to the head. But first, the roughly 45-year-old iceman fueled up, enjoying one last hearty meal.

Fortunately for science, his dead body was neatly preserved in a rock hollow and naturally mummified as the glaciers moved in and slid right over him, freezing his stomach contents.

What Otzi ate remained something of a mystery after he was first found in 1991. His stomach had shifted upwards over time, making it tough to pinpoint what he ate right before he died, and earlier studies focused more on his intestines. Some scientists thought he might’ve munched on some kind of prehistoric bacon.

New research, released Thursday in the journal Current Biology, gives us a closer picture than ever of exactly what the mountain man ate to power his high-altitude journey.

Turns out, the guy loved fat.

Microbiologist Frank Maixner of the Eurac Research Institute for Mummy Studies said he found a “remarkably high proportion of fat” – roughly 50% – in the mummy’s stomach.

Probing further into the DNA in iceman’s stomach, scientists found evidence of ibex [wild goat] and red deer inside, as well as einkorn wheat. A new analysis of the meat fibres in iceman’s gut confirms they were probably cooked, barbecued, or smoked and dried in some way before he ate them because the protein compounds looked different than raw meat would. Previous studies of iceman found some charcoal in his intestine, further suggesting he was a griller.

A rendering of what Ötzi might’ve looked like, from the South Tyrol Museum of Archaeology in Bolzano, Italy.

It looks like Otzi ate well. He had a good mix of nutritional minerals, like iron, calcium, zinc, magnesium, and sodium in his stomach. These probably came from consuming animal products.

He also had smaller concentrations of chromium, copper, manganese, selenium, molybdenum, and cobalt in there.

“These data suggest that the Iceman’s last meal was well balanced in terms of essential minerals required for good health,” the scientists wrote in their paper. That was a smart strategy for someone trekking nearly 10,500 feet high, slogging through the Alps between Austria and Italy.

“Iceman seemed to have been fully aware that fat represents an excellent energy source.” paleopathologist Albert Zink, also at the Eurac Research Institute for Mummy Studies said in a release. “The high and cold environment is particularly challenging for the human physiology and requires optimal nutrient supply to avoid rapid starvation and energy loss.”

The iceman functioned using a similar principle to today’s popular ketogenic diet. When there are no carbohydrates or sugars left to fuel your journey, the body can switch into ketosis, relying on fats to keep the brain and body moving.

But the iceman was not a paleo dieter, nor was he a fan of the low-carb, high-fat keto plan.

“The Iceman’s last meal was a well-balanced mix of carbohydrates, proteins, and lipids, perfectly adjusted to the energetic requirements of his high-altitude trekking,” the paper’s authors wrote.

In other words, he wasn’t a picky eater, and nibbled on all kinds of foods, including some dangerous toxic bracken ferns. Scientists still aren’t sure exactly why he would have eaten a toxic leaf, but suspect it could have been some kind of early stomach medicine, or else it was just an earthy container that some of his other food was wrapped inside, like an early Tupperware.

His prehistoric body was not immune to some of the ill effects of a high-fat diet, either. Body scans show that his middle-aged arteries were hardening, and it looks like he was well on his way to developing coronary artery disease. That didn’t matter once he was murdered and plunged down into a dark rock hollow, putting his fresh and fatty meal on ice for curious scientists to discover thousands of years later.