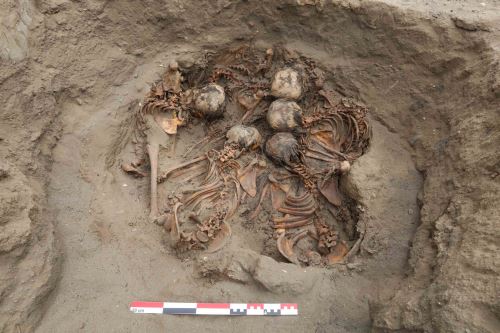 An archaeological discovery in Peru: 76 graves of sacrificed children found in Huanchaco

A new archaeological find has been reported in the Huanchaco district in the province of Trujillo. An additional 76 graves of sacrificed children were discovered, thus totalling six child sacrificial events in more than 450 years.

The graves were unearthed at Pampa La Cruz archaeological site, located in the Huanchaco district.

The head of the Huanchaco Archaeological Program (Pahuan), Gabriel Prieto, reported that the results of the 80 radiocarbon dating analyses carried out on the evidence found so far led us to conclude this thesis.

In addition, there were six sacrificial events, dating from between 1050 and 1500 AD, associated with important moments in the beginning, development, and consolidation of the Chimu society.

Prieto, who was born in Huanchaco, told the Andina news agency that 76 new children’s graves were discovered in the last excavation process carried out between July and August this year.

Out of that total, 25 graves were found in Mound I and the other 51 were uncovered in Mound II.

To date, the remains of 302 minors have been unearthed in said area.

The most unusual tomb was found in Mound I: It belonged to five women sitting head to head in a sort of circle. The analysis will determine its meaning.

The archaeologist, who is also a researcher at the University of Florida in the United States, pointed out that the earliest sacrificial event occurred between about 1050 and 1100, until 1200 AD, and was found in Mound I.

In this area, the children have something in common: their bodies are placed with their feet towards the east and their heads towards the west; that is, they turn their backs on the sea —a pattern that is repeated in all the bodies dating to that time.