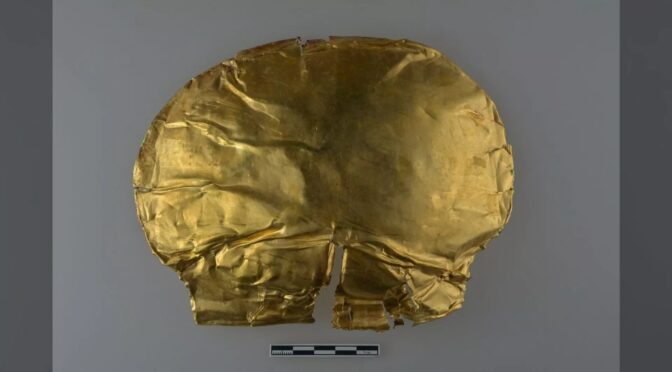 A gold funeral mask, thought to be more than 3,000 years old, has been discovered in the tomb of an ancient noble in the city of Zhengzhou in central China.

It’s one of the oldest gold objects ever found in central China, as contemporary treasures tend to be crafted from bronze and jade, raising questions about possible links to other early Chinese states where gold was more common.

The gold mask is 7.2 inches (18.3 centimetres) long and 5.7 inches (14.5 cm) wide — large enough to cover the entire face of an adult, Huang Fucheng, a researcher at the Zhengzhou Municipal Institute of Cultural Heritage and Archaeology, told the state-owned China News Service(opens in new tab). It weighs about 1.4 ounces (40 grams).

And the South China Morning Post(opens in new tab) (SCMP) reported that the institute’s director, Gu Wanfa, said the gold mask may have symbolized that the deceased had an “imperishable gold body” and was likely intended to keep the spirit of the dead person whole.

Government archaeologists made the announcement of the mask’s discovery during a news conference in Beijing on Sept. 16. Finds from three other ancient Chinese archaeological sites were also revealed at the news conference, but the gold mask is arguably the most striking.

The newfound noble’s tomb dates to the Shang Dynasty, which ruled in the Yellow River valley from about 1600 B.C. to 1046 B.C. — the earliest dynasty ever recorded in China, Live Science previously reported.

The tomb, which covers an area of more than 108,000 square feet (10,000 square meters), contains more than 200 other artefacts, China News Service reported(opens in new tab), including ornate objects of bronze and jade, such as daggers, axes, wine vessels, smoking pipes and goblets. Archaeologists also found plaques inlaid with turquoise and coins made from shells.

The newfound Zhengzhou tomb is a significant find for research into the burial rituals of the Shang Dynasty, and it may even provide new insight into the origins of Chinese civilization, Chen Lüsheng, deputy director of the National Museum of China in Beijing, told the outlet.

The newly discovered funeral mask, from the tomb at Zhengzhou in Henan province, is older than the gold funeral mask found last year in the Sanxingdui Ruins, an archaeological site in China’s southwestern Sichuan province attributed to the Shu kingdom.

The Shu kingdom in the southwest is traditionally dated as later than the Shang Dynasty in central China. But the two states may have existed at the same time, and archaeologists hope to establish links between them.

The Sanxingdui mask had detailed facial features, but archaeologists said it was attached to a wooden post or mannequin, rather than to an actual dead body. Such masks and other gold artefacts are relatively common at the Sanxingdui Ruins site, but they are rare at Shang Dynasty sites.

However, it’s unclear whether the younger Sanxingdui mask and the newfound Shang mask have any connection. “Although this gold mask is older than those unearthed from the Sanxingdui Ruins, we still need more evidence and a larger [number] of archaeological discoveries to confirm a direct connection between the Shang city ruins and the Sanxingdui Ruins,” Chen said.

The discovery of the new gold mask is “exciting,” said archaeologist and metallurgist Ruiliang Liu, a curator of the Early China Collection at the British Museum in London who wasn’t involved in the Zhengzhou finds.

Liu told Live Science that the ritual system of Bronze Age China was dominated by ritual vessels of jade and bronze — a tradition that was established during the Shang Dynasty when an extensive industry existed to manufacture such objects.

Gold and silver, however, were associated with the pastoralist cultures of the steppes, such as those of Central Asia, northwestern China and Mongolia, he said.

“The discovery of the gold mask in such an early and important context at Zhengzhou raises many intriguing questions,” Liu said. “Where does the raw gold come from? … [and] why did the tomb occupant choose to be buried with gold, while other top elites chose only bronzes and jades?”

One possibility is that the gold had been found in relatively small amounts at Panlongcheng — an important Shang site near the modern city of Wuhan that supplied copper, and tin and probably lead to ancient Zhengzhou — and that it had been worked by local artisans with the techniques they used for other metals, he said.

But another possibility is that the gold was brought from farther afield as an exotic metal, which could indicate a trade network existed during the Shang period between the Yellow River valley and gold-producing regions, such as the Yangtze River valley farther south, he said.

Liu also noted that very few Shang Dynasty archaeological sites near Zhengzhou have been excavated because a large modern city sits above most of them.

“The major part of Zhengzhou archaeology is under the modern Zhengzhou city,” Liu said. “I am sure more will come to light in the future.”