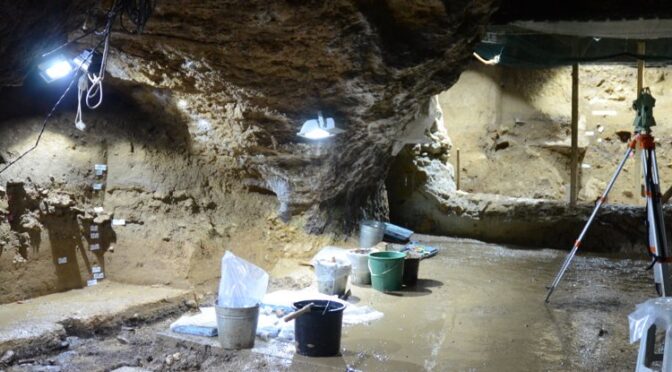 According to new research, modern humans have overlapped with Neanderthals in Europe longer than previously thought. Remains of Homo sapiens found in a Bulgarian cave are roughly 44,000 to 46,000 years old, making them the oldest directly dated remains of modern humans in Europe, reports Bruce Bower for Science News.

Nicola Davis for the Guardian reports that Neanderthals had been stumpy, cold-adapted hominins living across Europe and as far east as Siberia until about 40 000 years ago.

Neanderthal remains to live on in modern human DNA, indicating that our species and theirs met and interbred, but how long the two groups overlapped is unclear.

Other human remains previously discovered in the United Kingdom and Italy have been dated to between 41,000 and 45,000 years ago, but their ages were measured indirectly, relying on the fossils’ archaeological and geological surroundings rather than the specimens themselves, reported Jonathon Amos for BBC News in 2011.

The direct dating of these newly unearthed remains from the Bacho Kiro Cave in northern Bulgaria comes from two sources: radiocarbon dating and DNA extracted from a tooth and six shards of bone identified as belonging to H. sapiens.

Both methods dated the remains to around 44,000 to 46,000 years ago, the researchers report in two papers published in the journals Nature Ecology & Evolution and Nature.

“Our work in Bacho Kiro shows there is a time overlap of maybe 8,000 years between the arrival of the first wave of modern humans in eastern Europe and the final extinction of Neanderthals in the far west of Europe,” Jean-Jacques Hublin, a paleoanthropologist at the Max Planck Institute and co-author of the research, tells the Guardian.

The new estimate adds as much as 5,000 years of biological, cultural, and behavioral interaction between the species compared to the chronology suggested by other researchers, he tells the Guardian.

Hublin and his colleagues began their new excavation at the Bacho Kiro Cave in 2015. The site was first excavated by archaeologists in 1938 and then again in the 1970s.  The new dig turned up animal bones, tools made of stone and bone, beads and pendants, and, of course, a handful of ancient human remains.

The team had some 1,200 fragments of bones and teeth, but only a single molar could be visually identified as having come from a modern human. To figure out which species all the other fragments belonged to, the researchers extracted proteins from each specimen.

The protein’s structure can be used to tell species apart. This massive screening process yielded six additional chunks of human remains. Genetic evidence also corroborated the identities of six out of the seven fossils.

“In my view, this is the oldest and strongest published evidence for a very early upper paleolithic presence of Homo sapiens in Europe, several millennia before the Neanderthals disappeared,” Chris Stringer, an expert in human origins from London’s Natural History Museum, tells the Guardian.

In 2019, Stringer was part of a team that reported an incomplete skull found in Greece may have belonged to a modern human that lived some 210,000 years ago. However, both the age and species assigned to the skull have been disputed.

Stringer tells the Guardian that he has doubts about whether subsequent Neanderthal jewelry and tools were influenced as a result of interactions with early modern humans. In an interview with Science News, Stringer cites Neanderthal jewelry made out of eagle talons from roughly 130,000 years ago.

The new findings highlight the mystery of why Neanderthals disappeared when they did, if, as these new findings suggest, they coexisted with modern humans for millennia. If they were able to persist side by side for so long, what finally drove Neanderthals to extinction?

According to Richard Klein, a paleoanthropologist at Stanford University who was not involved in the research, who spoke with Tom Metcalfe of NBC News, “that’s the ultimate question.”

Stringer tells the Guardian that there simply may not have been enough of these early modern human pioneers in Europe to establish and sustain a significant presence, adding that an unstable climate could have also kept them at bay.