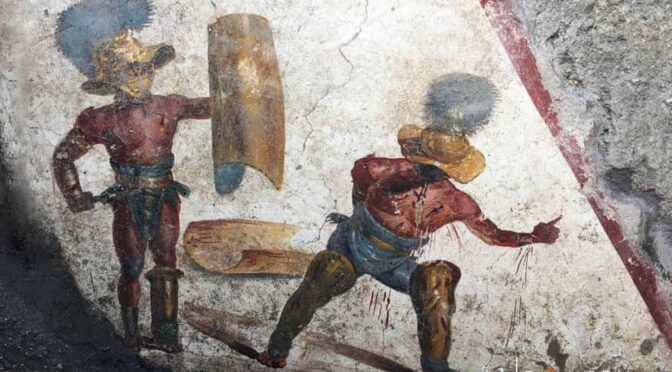 Ancient images of gladiators unearthed at the city of Pompeii

Archeologists in the ancient Roman city of Pompeii have uncovered a well-preserved fresco showing fighting gladiators.

This scene marks the end of a war between a murmullo and a Thracian form of gladiator, one victorious and the other losing. Both types are described by weapons and armor.

It is the latest discovery in Regio V, a 21.8-hectare (54-acre) site to the north of the archaeological park that is yet to open to the public.

The fresco was found on a wall beneath the stairwell of what was probably a tavern frequented by gladiators and which provided accommodation on a higher floor for them to sleep with sex workers.

“It’s very probable that this place was frequented by gladiators,” said Massimo Osanna, the director-general of Pompei’s archaeological park.

“We are in Regio V, not far from where there were barracks for gladiators, where among other things, there was graffiti referring to this world.

“Of particular interest in this fresco is the very realistic representation of wounds on the wrist and chest of the unsuccessful gladiator … we don’t know the outcome of the fight, he could have died or was given grace.”

Excavations at Regio V have yielded dozens of discoveries since work began last year as part of the EU-funded Great Pompeii Project.

A frescoed “fast food” counter, or thermopolium, was found in March and another depicting the mythological hunter Narcissus enraptured by his own reflection in a pool of water was discovered in February.

Human remains have also been found, including the skeletons of two women and three children huddled together in a villa, as well as the remains of a harnessed horse and saddle.

Much work has been done across the entire park, which has attracted almost 4 million visitors a year since 2013 when Unesco threatened to place it on its list of world heritage sites in peril unless Italian authorities improved on preservation.

“A few years ago the archaeological site of Pompeii was known throughout the world for its negative image: the collapses, the strikes and the queues of tourists under the sun,” said Italy’s culture minister, Dario Franceschini.

“Today’s story is one of redemption and millions of more tourists. It is a welcoming site, but above all, we have returned to doing research through new digs.

“The discovery of the fresco shows that Pompeii is an inexhaustible mine of research and knowledge for today’s archaeologists and for those of the future.”