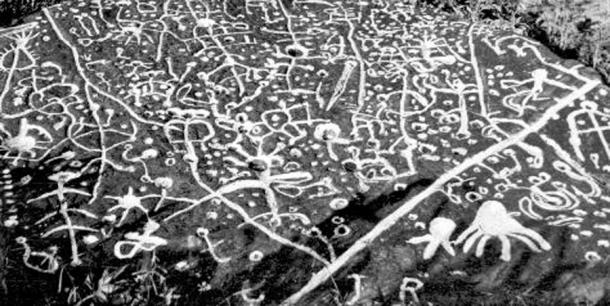 In the mountains of Jackson County in North Carolina lies a large mysterious rock covered in petroglyphs that have yet to be deciphered. For the Cherokee Indians, the rock and surrounding area is a sacred site where ceremonies used to take place. Indeed, Judaculla Rock is surrounded by rumours and legends, including strange sounds and UFO sightings during the night.

Judaculla and the Cherokee Indians

According to Cherokee oral tradition, in ancient times Judaculla was a slant-eyed giant with seven fingers who lived in the mountainous area, and the stone was his territorial marker. They believed the seven-digit claw marks are his handprints and a long, straight line drawn on the rock was a boundary: cross that, and they were impeding onto his hunting territory.

The name Judaculla means “he has them slanting” or the “slant-eyed giant,” and the Cherokee attributed him with superhuman strength and capabilities like flying or teleporting from mountaintop to mountaintop. Legend had it that Judaculla was even capable of controlling the wind, rain, thunder and lightning.

The Cherokee believed that Judaculla was able to take ordinary people to the spirit world and was able to communicate with people. It appears to be a similar type of god-like creature as the ones mentioned in all mythologies around the world.

Judaculla rock can be found just 6 miles (9.66 km) from Cullowhee, an anglicized form of Judaculla-whee, meaning “Judaculla’s Place.” The stone itself is a curvilinear-shaped outcrop of soapstone rock with more than 1,500 petroglyphs all over it. The symbols are tightly packed together and include many stick-like figures, two strange seven-digit hand/claw prints, thousands of cup marks, as well as many other carvings. It measures about 22 meters squared (240 sq ft).

The petroglyphs probably date back to between 2000 and 3000 BC and during digging around the stone, quarry tools were discovered. No other stones in the area were found with similar markings, making the stone even more mysterious. The site has been included on the National Register of Historic Places.

Deciphering the Petroglyphs of Judaculla Rock

Theories about the content of the petroglyphs on the rock are abundant. They span from maps to religious symbols with a secret message or just graffiti made by ancient people.

Rock art may represent animals or humans or other figures of importance. Recently a team of scientists used laser-guided equipment in order to create a detailed view of the Judaculla Rock for studying. Unfortunately, the weather has started corroding the rock and the symbols will gradually disappear since the rock is ­­open to the weather.

Medium reported that in 1945, the Cherokee Chief Blythe believed “the rock carvings to be a record of a peace treaty between the Cherokee and the Catawbas.” Other theories include the petroglyphs representing a “game conservation law,” picture map of a battle or even the record of a treaty. Nevertheless, the ubiquitous gaggle of pseudo-science sleuths is never far behind.

Many rumours and legends surround the mysterious rock including strange sounds and UFO appearances. Stories abound about ghost sounds around Judaculla Rock during the night, which Atlas Obscura claims are “made spookier by the location of a cemetery a few hundred feet away.”

Unfortunately, for the time being, the secret meanings of the Judaculla rock will remain locked. In the meantime, a silent battle is taking place to protect the site from over-tourism and to define the true meaning of the site. Some theories even claim that the site is surrounded by electromagnetic anomalies, adding to the enigma of Judaculla rock.

In fact, America Unearthed from the History Channel made a “documentary” about Judaculla Rock back in 2014, much to the dismay of local experts and custodians who opposed the access approved by the county, which has owned the site since the 1960s. “Already, some groups have placed online absurdities about Judaculla and the Rock, encouraging visits to the Rock by some weird or unstable folks,” wrote Keith Parker, whose family owned the Judaculla rock site for decades, in an email at the time to the county in protest at them being allowed to film at the ancient site, reported Smokey Mountain News.

Adding to the mystery, across the Atlantic, within the rolling green hills of Scotland, there are hundreds, if not thousands, of stones engraved with identical cup marks and cup and ring motifs as those evidenced on the Judaculla Rock. This has led some to wonder how it’s possible that somebody in the distant past carved the same motifs on separate continents?

These theories have angered the Cherokee population. “From the Cherokee perspective, Judaculla Rock is a cultural validation of who we are as a people,” wrote Dr Tom Belt, a Cherokee culture and language expert at Western Carolina University to the county in protest to filming by the History Channel, reported Smokey Mountain News. “Correct and conscientious stewardship of these gifts is a moral responsibility to those who have passed and to those yet to come.”