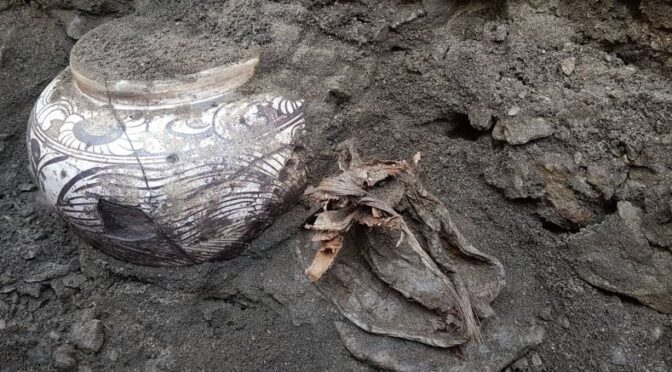 An anomaly of three clotted creams and one vase of yellow butter preserved in glacier about 700 to 800 years ago is discovered in the “Umard Mongol” joint investigation team of the National Museum of Mongolia, the University of Pittsburgh and the United States American Center for Mongolian Studies.

The excavation is considered to possibly be a new discovery for the international archeology scene alongside being a discovery related to nobles of the Mongolian Empire.

During the research team’s work on the protection of looted tombs relating to the Mongolian Empire and collecting artifacts that they found in 2018 and 2019 at the site named Khorig in Ulaan-Uul soum of Khuvsgul aimag.

They came across a large number of artifacts that are highly significant in research, which included the aforementioned vases with frozen clotted cream and yellow butter that were even more of a rare case.

Highly significant artifacts relating to the history of the Mongolian Empire such as items made of gold, silver, iron, silk, bones, hide and cork, as well as human and livestock bones, have also been found.

Specifically, gold relics with depictions of a golden sun, silver moon and deity, earrings and a golden accessory of a belt were unveiled with the several hundred artifacts that included various items such as a leather sack filled with trinkets in silk wrappings.

A part of a silk deel with a swastika pattern, dragons and other mythical creatures with golden thread, a part of a leather boot, bow and arrowhead, arrow case, porcelain, and clay vases, bone brush, and equestrian equipment.

The research team is being led by the Head of the Research Center at the National Museum, Dr. J.Bayarsaikhan, and Dr. Julia Clark.

These cultural findings are expected to serve as proof of the triumphant history of the Mongolian Empire and have an important role in developing patriotic views and respect for national heritage for the future generations of Mongolia.