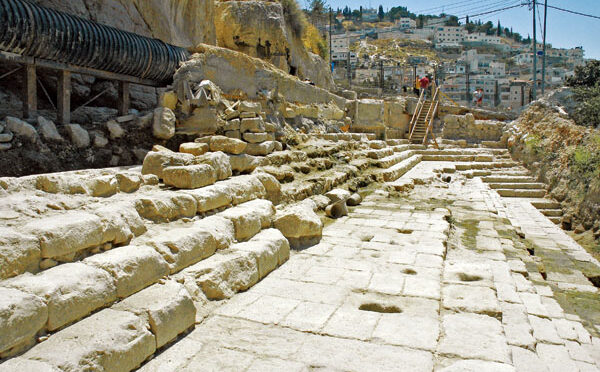 The Siloam Pool: Where Jesus Healed the Blind Man

In Old Jerusalem workers have stumbled upon the ruins of the Siloam Pool, wherein John’s Gospel, Jesus cures a man who is blind from birth — the new find is praised as a discovery that helps to demonstrate the Bible’s historical authenticity.

In the Los Angeles Times, James H. Charlesworth, a New Testament scholar of the Princeton Theological Seminary, had a quote: “Scholars have said that there wasn’t a Pool of Siloam and that John was using a religious conceit” to illustrate a point…”Now we have found the Pool of Siloam … exactly where John said it was.”

A gospel that was thought to be “pure theology is now shown to be grounded in history,” he added.

Sewer workers discovered the pool some 200 yards from another Pool of Siloam, this one constructed somewhere between 400 and 460 AD by the Empress Eudocia of Byzantium, who, experts say, commissioned the rebuilding of several biblical sites.

Archeologists say that the pool which appears in John’s Gospel was built around the 1st century BC and destroyed by the Roman Emperor Titus in 70 AD.

The sewer line repair which led to the discovery was being overseen by Eli Shukron of the Israel Antiquities Authority who, according to the LA Times report, was “100% sure it was the Siloam Pool,” when his group saw two steps unearthed by the workers.

The account of the pool in the Gospel of John shows Jesus encountering a man there who had been blind since birth. Jesus’ disciples thought that the man was blind because of some sin of his own or his parents.

Jesus then responds that the man is blind so that God’s work might be revealed in him, spits in the dust to make mud and rubs it in the man’s eyes telling him to wash himself in the Pool of Siloam.

The return of the man’s sight makes this story one of the most often recalled in the whole of the Gospels. Now, theologians and biblical scholars are excited that the significance of this miracle can be appreciated in a whole new light.