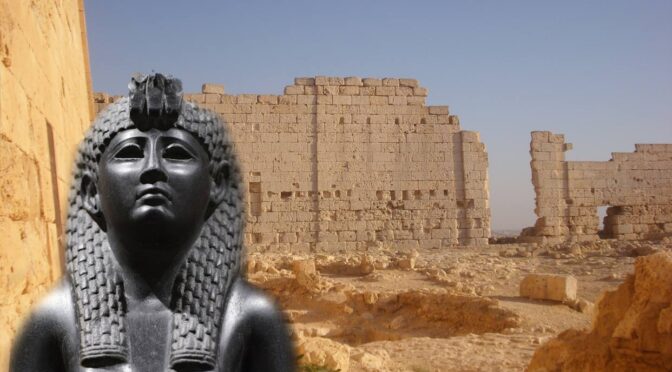 One of history’s most famous love stories may finally be getting its ending — after more than 2,000 years. Archaeologists have teased a key breakthrough in finding Egyptian Queen Cleopatra’s final resting place — a hidden tomb where she is assumed to have been buried with ill-fated lover Mark Antony after their suicides.

The discovery was made during a “meticulous” dig in Taposiris Magna, a temple “honeycombed with hidden passages and tombs” on Egypt’s Nile delta, according to the Science Channel.

The scientists uncovered an “undisturbed tomb decorated in gold leaf” that a new documentary suggests “could be the answer to the 2,000-year-old mystery of Cleopatra’s final resting place” in 30 B.C.

“Their findings revolutionize our understanding of who she was and how she lived,” claimed the channel of the findings to be revealed in a two-hour special, “Cleopatra: Sex, Lies, and Secrets,”

The show follows the team led by Dr. Kathleen Martinez, who describes herself as a “Dominican archaeologist in search of Cleopatra” and has teased numerous breakthroughs on social media.

Cleopatra was the last queen of Egypt — having been crowned at just 18 — and is one of history’s most famous female rulers.

Yet she is “synonymous with seduction, beauty, and scandal,” the Science Channel noted, calling her “an icon of popular culture and one of the most elusive yet significant female figures in history.”

As well as the history books, her story is the subject of one of William Shakespeare’s greatest works, “Antony and Cleopatra,” as well as one of Elizabeth Taylor’s most iconic big-screen performances, with 1963’s “Cleopatra,” the most expensive movie of its age.

Even before her tragic love-story with Antony, she had a string of historic flings — having married and had a son with Roman Emperor Julius Caesar, according to History.com.

After Caesar was murdered in 44 B.C., Cleopatra went back to Egypt but was summoned to meet Roman general Antony to explain any role she may have had in the assassination.

She supposedly arrived on a golden barge rowed by silver oars, made to look like the goddess Aphrodite as she sat beneath a gilded canopy fanned by staff dressed as cupid, according to folklore.

Antony was instantly seduced, leading to three children — and the pair’s ultimate downfall.

Antony had been forced to prove his loyalty to Caesar’s successor as Roman Emperor, Octavian, by marrying his half-sister, Octavia — but soon dumped her to return to Cleopatra in Egypt, History says.

It sparked a war, which Octavian’s forces easily won in the Battle of Actium.

Antony famously fell on his sword when told his lover had killed herself — dying just as news arrived that it was not true.

Roman troops soon captured Cleopatra, and Octavian wanted to keep her alive to display her as a prize during a victory parade, according to llis Roxburgh, the author of “Cleopatra vs. the Roman Empire.”

Refusing to be used, Cleopatra killed herself — and is widely assumed to have done so by letting a snake poison her.

Dead at 39, she is believed to have been buried with her lover — sparking the more than 2,000-year mystery over the exact location of their tomb.