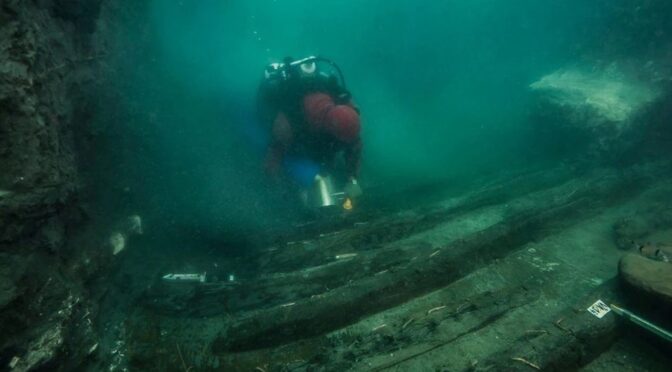 A Doomed ship that sank after it was hit by gigantic stone blocks following an earthquake 2,200 years ago has been found in Egypt. The wreck was discovered by archaeologists at the site of Thonis-Heracleion, a city that crashed into the water as a result of the megaquake.

Scattered across a series of interlinked islands off Egypt’s northern coast, the metropolis was once the country’s gateway to the Mediterranean.

It was lost to a cataclysmic event towards the end of the second century BC that buried it under layers of sand and mud.

Thonis-Heracleion was rediscovered by underwater archaeologists in the early 2000s and expeditions continue to uncover rubble and artefacts.

Earlier this month, archaeologists announced the discovery of a galley and burial ground at the site beneath the Mediterranean Sea. The expedition was led by the European Institute for Underwater Archaeology with help from Egypt’s Ministry of Tourism and Antiquities.

They believe the ship plunged to the seafloor “after being hit by huge blocks from the famed temple of Amun”, according to the EIUA.

Located in the middle of the city and dedicated to the god of Amun, the massive temple was one of the dozens of buildings lost to the deadly quake.

The wreck was once a fast galley, a long and sleep vessel with large sails built to skim across the water at high speeds. It now lies beneath just over 16 feet (five metres) of clay and rubble from the temple, researchers said.

They located the ship used a new type of sonar technology.

The team believe the warship was moored channel that flowed along the south side of the Temple of Amun.

When an earthquake struck the city, the hard clay it was built on began to behave more like a liquid, toppling buildings across the city.

Large stone blocks that tumbled from the temple likely crashed onto the boat, causing it to sink.

It’s not clear whether anyone was on board at the time. A burial ground containing various trinkets and other artefacts was also uncovered by researchers.

It was in use as far back as 2,400 years ago and contained elaborately decorated pottery and a gold amulet depicting Bes, an Egyptian god associated with childbirth and fertility.