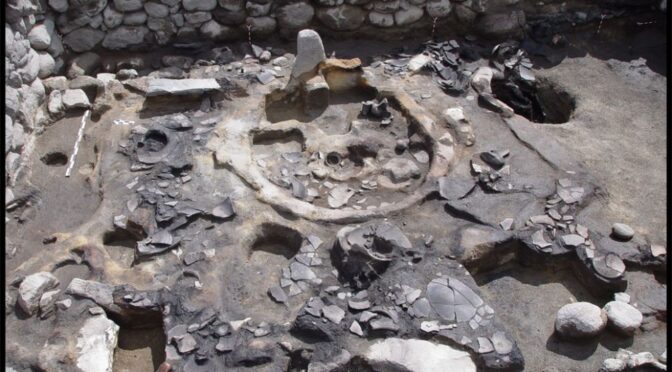 Archaeologists say three 3,300-year-old shrines set up by an unknown culture in Armenia apparently were used for occult divination.

Three shrines, dating back about 3,300 years, have been discovered within a hilltop fortress at Gegharot in Armenia. Local rulers at the time probably used the shrines for divination, a practice aimed at predicting the future, the archaeologists involved in the discovery say.

Each of the three shrines consists of a single room holding a clay basin filled with ash and ceramic vessels. Wide varieties of artefacts were discovered, including clay idols with horns, stamp seals, censers used to burn substances and a vast amount of animal bones with markings on them.

During divination practices, the rulers and diviners may have burnt intoxicating substances and drank wine, allowing them to experience altered states of mind, the archaeologists say.

“The logic of divination presumes that variable pathways articulate the past, present and future, opening the possibility that the link between a current situation and an eventual outcome might be altered,” Adam Smith and Jeffrey Leon write in an article published recently in the American Journal of Archaeology.

Smith is a professor at Cornell University, and Leon is a graduate student there.

Excavations at the shrines are part of the American-Armenian Project for the Archaeology and Geography of Ancient Transcaucasian Societies, also known as Project ArAGATS.

The shrines were unearthed over a period stretching from 2003 to 2011.

Smith told LiveScience that the region’s rulers probably used Gegharot as an occult centre. At the time, writing had not yet spread to this part of Armenia, so the names of the polity and its rulers are unknown.

Smith and Leon found evidence for three forms of divination at Gegharot. One form was osteomancy, trying to predict the future through rituals that involved rolling the marked-up knucklebones of cows, sheep and goats like dice.

Lithomancy, trying to predict the future through the use of coloured pebbles, also appears to have been practised at Gegharot.

And at one shrine, the archaeologists found an installation used to grind flour. Smith and Leon think that this flour could have been used to predict the future in a practice called aleuromancy.

The shrines were in use for a century or so until the surrounding fortress, along with all the other fortresses in the area, were destroyed.

The site was largely abandoned after this, Smith said. Although the rulers who controlled Gegharot put great effort into trying to predict and change the future, it was to no avail.