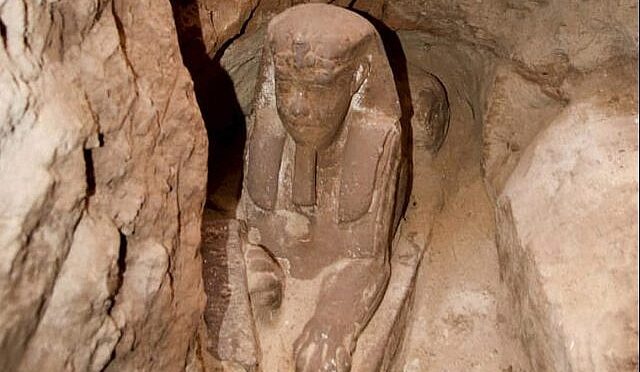 Egyptian archaeologists working on a groundwater reduction project at the Kom Ombo Temple in Aswan have discovered a sandstone sphinx, according to the Egyptian Ministry of Antiquities on Sunday.

The discovery comes as a surprise as in the last few months, archaeologists working in Egypt have uncovered the remains of two Sphinx statues.

A few weeks ago, we wrote about how construction workers working near the Luxor Temple Complex stumbled across the remains of a buried Sphinx statue.

Initial reports by the Egyptian Ministry of Antiquity suggested that the Sphinx uncovered at Luxor is similar in design to the Great Sphinx of Giza: It has the body of a lion and the head of a human.

The most famous Sphinx in Egypt is without a doubt the massive statue located on the Giza plateau.

The Great Sphinx of Giza is considered an ancient marvel not only because of its size and confusing design but because of the countless mysteries that surround this ancient structure.

Together with the three pyramids, the Great Sphinx found on the plateau of Giza – about 500 km from the place where the new statue was found – is one of the most emblematic monuments of Egypt.

Now, archaeologists near Aswan made another stunning discovery by finding another Sphinx statue.

Mostafa Waziri, general secretary of the Supreme Council of Antiquities of Egypt, explained that the piece probably dates from the Ptolemaic dynasty, as the Sphinx statue was found on the southeast side of the temple, in the same place where two sandstone reliefs of King Ptolemy V were discovered two months ago.

The Ptolemaic Dynasty ruled over Egypt for 275 years, from 305 to 30 BC, and they were the last dynasty of ancient Egypt.

The Kom Ombo temple complex was constructed during the Ptolemaic Dynasty.

Ptolemy V was the fifth ruler of the Ptolemaic dynasty from 204 to 181 BC. He inherited the throne at the age of five, and under a series of regents, the kingdom was paralyzed. It is noteworthy to mention that to famous Rosetta Stone was produced during his reign as an adult.

The sculpture, discovered at the Kom Ombo Temple in Aswan bears hieroglyphic and demotic inscriptions and has already been transported to the National Museum of Egyptian Civilization in Fustat, where it will be carefully studied and restored by the archaeological mission to obtain more information about its origin.

After restoration, the newly-found Sphinx will be exhibited to the public.