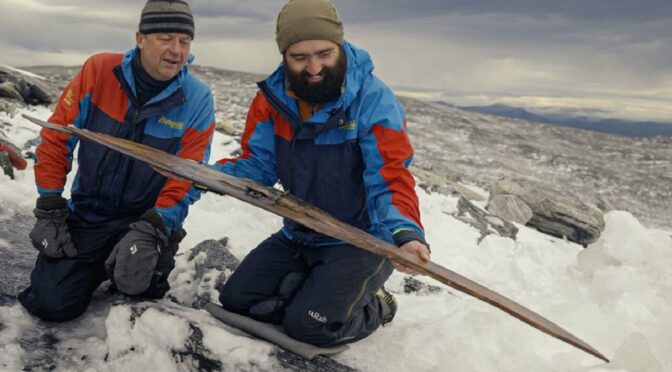 The long-lost ski of a pair used more than 1,300 years ago has been discovered on a Norwegian mountain top. The first ski was uncovered in 2014 and seven years later, the Digervarden ice patch melted enough to reveal its wooden counterpart – together they make the oldest pair of skis ever to be found.

On September 26, a team of Norwegian archaeologists led by the Secrets of Ice program hiked three hours up Mount Digervarden to the spot where the first ski was discovered.

Using GPS position and photos taken from the initial visit, the researchers located the second ski under the ice, which they chipped away with an axe and melted with boiling water to break the artefact free.

The Digervarden ice patch is in Reinheimen national park, located in Nordberg, Norway. It is a popular archaeological site that has revealed several ancient treasures once used thousands of years ago.

However, the reason these forgotten items are surfacing is due to climate change melting the once-solid ice sheets. The newly discovered ski is 187 cm long and 17 cm wide, 17 cm longer and 2 cm wider than the first ski found in 2014.

Archaeologist Lars Holger Pilø, who was part of the excavation, wrote in a blog post that the preservation of the new ski is much better, which may be due to it being deeper in the ice.

‘That may account for some of the differences in dimensions between the two skis,’ Pilø shared.

The long wooden plank features three twisted birch bindings, a leather strap and a wooden plug through the hole in the foothold.

The ski found in 2014 only had one twisted birch binding and a leather strap through the hole.

Both skis have a hole through the tip.

There are slight differences in the pair, one being that the back end of the new ski, while the one found in 2014 is straight. Interestingly, the new ski shows signs of repairs and a piece of the back end is missing that could still be frozen in the ice.

‘Whether it broke when lost or while inside the ice may be possible to say at a later stage based on a careful study of the edge of the break,’ Pilø shared in the post.

‘The skis are not identical, but we should not expect them to be. The skis are handmade, not mass-produced.

‘They have a long and individual history of wear and repair before an Iron Age skier used them together and they ended up in the ice 1300 years ago.’

In November 2020, Pilø and his colleagues found a trove of artefacts on a mountainside in Jotunheimen in Norway. The items included nearly 70 arrow shafts, shoes, textiles and reindeer bones.

The heads were made from a variety of materials — iron, quartzite, slate, mussel shell and even bone.

Several still had the twine and tar used to affix them to a wooden shaft.