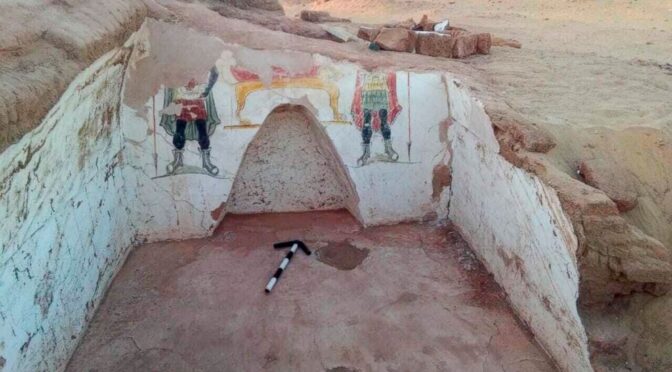 Archaeologists in Egypt have discovered two ancient tombs dating back to the Roman period in the country’s the Western Desert. The team discovered structures of two different architectural styles at the Beir Al-Shaghala site in the Dakhla Oasis, though both were built from mud-brick.

Inside the colourfully-painted tombs, they also found several human skeletons, clay lamps, and a number of pottery vessels. Each of the tombs is decorated in vibrant funeral paintings, though much of the artwork has been lost to time.

According to Egypt’s Ministry of Antiquities, the paintings once illustrated the process of mummifying the deceased.

Archaeologists have been excavating the site since 2002 over the course of five archaeological seasons.

The latest finds include one sandstone tomb with a 20-step staircase and a mud-brick tomb located on the east side of the first.

In recent years, Egypt has heavily promoted new archaeological finds to international media and diplomats in the hope of attracting more visitors to the country.

The vital tourism sector has suffered from the years of political turmoil since the 2011 uprising.

Archaeologists revealed another Roman-era discovery earlier this month from the Egyptian west coast.

Recent excavations uncovered the ruins of a sprawling Hellenistic fortress constructed more than 2,000 years ago.

Researchers say the ancient fortress was built to defend a port on the Red Sea coast, with three large courtyards and numerous structures that housed workshops and stores.

Inside, the team also found trash heaps filled with terracotta figures, coins, and even a fragment of an elephant skull.

The ruins of the Roman city, called Berenike Trogodytika, were first discovered in 1818, though it wasn’t until 2012 that excavations finally began.

Work at the site uncovered a ‘multi-phased’ building measuring about 160 meters long and 80 meters wide.

The team also found a line of defences along the north and north-east side.

According to the researchers, the findings at Berenike represent the first known Hellenistic urban site in the region.