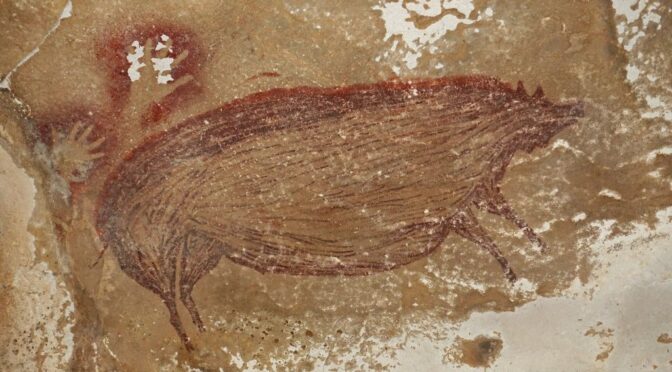 Archaeologists Have Discovered a Pristine 45,000-Year-Old Cave Painting of a Pig That May Be the Oldest Artwork in the World

Archaeologists have discovered the world’s oldest known animal cave painting in Indonesia – a wild pig – believed to be drawn 45,500 years ago. Painted using dark red ochre pigment, the life-sized picture of the Sulawesi warty pig appears to be part of a narrative scene.

The picture was found in the Leang Tedongnge cave in a remote valley on the island of Sulawesi. It provides the earliest evidence of human settlement of the region.

“The people who made it were fully modern, they were just like us, they had all of the capacity and the tools to do any painting that they liked,” said Maxime Aubert, the co-author of the report published in Science Advances journal.

A dating specialist, Mr. Aubert had identified a calcite deposit that had formed on top of the painting and used Uranium-series isotope dating to determine that the deposit was 45,500 years old.

This makes the artwork at least that old. “But it could be much older because the dating that we’re using only dates the calcite on top of it,” he added.

The report says that the painting, which measures 136cm by 54cm (53in by 21in), depicts a pig with horn-like facial warts characteristic of adult males of the species.

There are two handprints above the back of the pig, which also appears to be facing two other pigs that are only partially preserved. Co-author Adam Brumm said: “The pig appears to be observing a fight or social interaction between two other warty pigs.”

To make the handprints, the artists would have had to place their hands on a surface before spitting pigment over it, the researchers said. The team hopes to be able to extract DNA samples from the residual saliva as well.

The painting maybe the world’s oldest art depicting a figure, but it is not the oldest human-produced art.

In South Africa, a hashtag-like doodle created 73,000 years ago is believed to be the oldest known drawing.

‘Stand by for more discoveries’

Sulawesi is in a key location. It’s the largest island in a group that scientists often refer to as Wallacea after the great 19/20th Century naturalist Alfred Wallace.

The group sits on a dividing line, either side of which you find very different animals and plants.

But Wallacea’s significance also is that it must have been a stepping stone for modern humans as they made their way to Australia. We know they were on that landmass some 65,000 years ago, so it’s reasonable to assume they were also on Sulawesi at the same time or even earlier.

This raises the tantalizing prospect of there being figurative art out there, either on Sulawesi or the immediate islands, that are older still than 45,500 years old.

The limestone hills about an hour’s drive from Makassar have innumerable nooks and crannies, just like the cave at Leang Tedongnge.

Stand by for more discoveries.