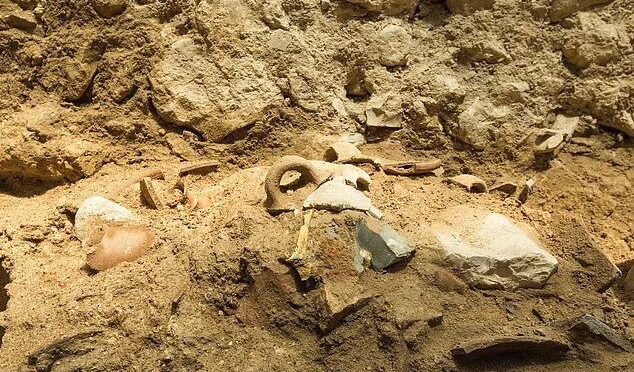 Books of Amos and Zechariah in the Old Testament describe an earthquake that rocked the city of Jerusalem about 2,800 years ago and archaeologists have now found the first evidence of the biblical event.

The Israel Antiquities Authority’s (IAA) excavations in the City of David National Park uncovered a layer of destruction during excavations, which consists of collapsed walls, broken pottery and bits and pieces of other goods.

Researchers say that since there was no signs of fire or an ancient conquest the destruction had to have been caused by an earthquake that hit Israel during the 8th century BC.

Some evidence of the event has been found in surrounding areas, but this is the first time archaeologists can prove it hit the major city.

In the book of Amos, the passage reads: ‘The words of Amos, a sheep breeder from Tekoa, who prophesied concerning Israel in the reigns of Kings Uzziah of Judah and Jeroboam son of Joash of Israel, two years before the earthquake.

Among the artefacts, archaeologists found were fragments of pottery, some nearly intact that they could be put back together, and small tables, The Jerusalem Post reports.

Since the artefacts were discovered deep into the excavation site, experts say residents had to have built on top of the ruins following the earthquake, which preserved traces of the event that occurred.

IAA excavation directors Dr. Joe Uziel and Ortal Chalaf said in a statement: ‘When we excavated the structure and uncovered an 8th century BCE layer of destruction, we were very surprised because we know that Jerusalem continued to exist in succession until the Babylonian destruction, which occurred about 200 years later.

‘We asked ourselves what could have caused that dramatic layer of destruction we uncovered.

‘Examining the excavation findings, we tried to check if there is a reference to it in the biblical text.

‘Interestingly, the earthquake that appears in the Bible, in the books of Amos and Zechariah, occurred at the time when the building we excavated in the City of David collapsed.’

Another biblical find was discovered in Israel last month – a pottery fragment unearthed in Israel bears the name of the biblical judge ‘Jerubbaal,’ which was inked on the artefact 3,100 years ago.

Mentioned in the Hebrew bible, Jerubbaal was a military leader, judge and prophet whose story is recounted in chapters 6 to 8 of the Book of Judges.

The ceramic artefact was discovered in an archaeological excavation at Horbat al-Ra’i, near Kiryat Gat in Israel, which experts say was part of a small jug that carried precious liquids.

‘The name is written on the jug, Yarubaal, may allude to biblical Jerubbaal, also known as the judge Gideon ben (son of) Yoash, but we cannot be sure if he owned the inscribed vessel,’ the Israel Antiquities Authority shared in a statement.