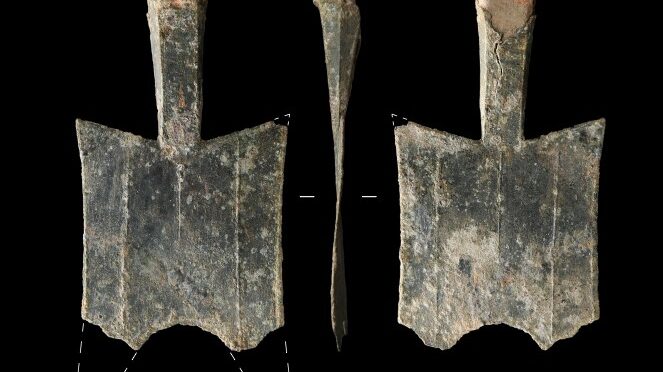 In their paper published on the Cambridge University site Antiquity, the group describes their discovery and study of coins and minting molds found at a dig site in Henan Province, China, and what they have learned about it.

Up until now, researchers have believed that the use of coins as a form of currency was first developed in Greece or Turkey.

Coins dug up in what is now modern Turkey, created and used by people of the Lydian Empire, have been dated as far back as 630 B.C. But there is still debate as to their true age due to the dating techniques used.

In this new effort, the researchers found coins in China in the same location as a minting facility, which left behind ashes that could be used for carbon dating—a very accurate means of dating the minting operation.

The coins and molds were found at a site identified as the ancient city of Guanzhuang, which was founded around 800 B.C.

Items found by the researchers included multiple bronze, spade-shaped coins and the clay molds that were used to make them.

Testing of the ashes left by the fires used to melt the metal showed them to be approximately 2,600 years old, which would mean the facility was used to make coins as recently as 550 B.C. and as long ago as 640 B.C., making it the oldest known coin-making facility ever discovered.

The researchers suggest the facility was first used to make tools, weapons and other objects as early as 770 B.C. It took another century for the people there to start using their technology to create coins.

They also note that historians have still not agreed on the reason for the creation of currency in the form of coins; some suggest it made buying and selling things easier, while others believe it came about as a way for governments to collect taxes.