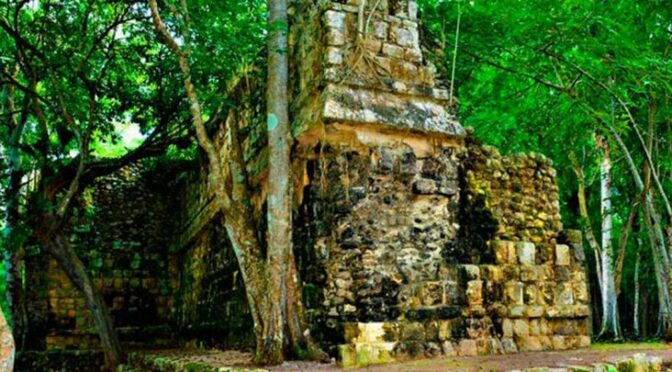 Archaeological work carried out by experts “has allowed confirming the existence of a palace to the east of the main square” of the so-called architectural Group C, INAH reported in a statement.

The remains of the building six meters high, 55 meters long and 15 meters wide were identified as a large palace used over two periods of ancient Mayan history dating back more than 1,500 years.

Scholars from INAH have revealed the large palace remained in use most likely during the Late Classic (600-900 AD) and the Terminal Classic (850-1050 AD).

In addition to the structures, archaeologists have also discovered a grave of several individuals at Kuluba. Experts will now work in order to determine their exact age and sex.

“This work is the beginning, we’ve barely begun uncovering one of the most voluminous structures on the site,” archaeologist Alfredo Barrera told Reuters.

Kuluba, which has now become the archeological site of Kuluba, was an important city with powerful ties to other ancient Maya cities of the region such as Ek’Balam and Chichen Itza. It is believed that Kuluba was part of a large network of trade encompassing many other ancient cities in the region.

“From data . . . and the Chichén-like ceramic materials and obsidian [found at Kulubá] . . . we can infer that it became an enclave [under the control] of Chichén Itzá,” Barrera said.

“Throughout the 20th century, Tizimín ceded most of its forest land to agricultural and livestock use. This means that the experts who are now restoring the Mayan buildings to their former glory not only live alongside spider monkeys and other species of flora and fauna but also give priority to the fact that the archaeological zone is distinguished by its natural and cultural balance” revealed INAH in a statement.

Kuluba is located not far away from the famous Caribbean vacation capital of Cancun. The name of the ancient city, Kulubá, is formed by the words “K’ulu”, which refers to a kind of wild dog, and “ha”, water.

To protect Kuluba from the climate and looting, the researchers are considering reforesting parts of the forest surrounding Kuluba. With a denser forest, the site will be better protected from sunlight and wind.

Experts have revealed that the archeological site should be opened to tourists in the medium term.

Archeological work at the site is being funded by the government of Yucatan. The people in charge of the archaeological site of Kuluba are part of a multidisciplinary project.