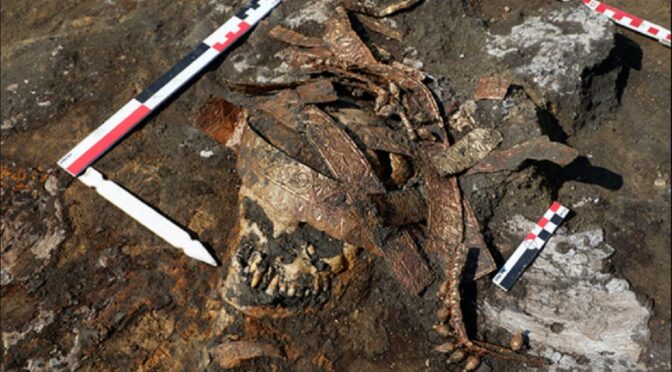 Once again scientists have found evidence supporting the existence of Amazon warriors who have previously been considered merely mythological characters.

Archaeologists from Russia currently conducting excavations in the Voronezh region have discovered an intriguing grave that belongs to a Scythian Amazon warrior. It’s a valuable historical discovery that sheds new light on the importance of fierce ancient female warriors.

The beautiful ceremonial headpiece placed on the head of the deceased woman makes this finding even more fascinating.

Since 2010, archeologists of the Russian Academy of Science Institute of Archeology have studied the Devitsa V burial mound in the district of Ostrogozhsky, and there they have found many interesting discoveries. This time they uncovered a burial that had been looted, but not entirely.

Inside burial mound, Maiden V archaeologists unearthed two well-preserved female skeletons. On tiled beds covered with grass beds, the women were put to rest. One of them was under his left shoulder with a bronze mirror. By her left side were put two spears and a necklace made from glass beads.

The other woman, who was between 45 to 50 years at the time of her deaths, had been adorned with a beautifully preserved headpiece, consisting of stamped gold plates with floral ornaments, as well as rims with amphora-shaped pendants.

This type of ceremonial headdress is called a calaf and archaeologists have unearthed similar headpieces, but only in the richest “royal” mounds of Scythia (Chertomlyk, Tolstaya Mogila, Deev mounds, mounds near the village of Aksyutintsy, mound No. 8 of the Pesochinsky burial ground).

“Found calathos is a unique find. This is the first head dress in the sites of Scythian epoch found on Middle Don and it was found in situ on the location on the skull. Of course, earlier similar head dresses were found in known rich barrows of Scythia. However, only a few were discovered by archaeologists.

They were more often found by the peasants, they were taken by the police, landowners and the finds had been through many hands when they came to the specialists. That is why it is not known how well they have been preserved. Here we can be certain that the find has been well preserved”, noted Valerii Guliaev.

This finding suggests the woman was a Scythian warrior. The complex history of the mysterious Scythian culture is slowly being reconstructed. The Scythians flourished from about 700 to 300 B.C. but their origins are still debated. The Scythians never developed a written language or a literary tradition, making it troublesome to piece together their historical records.

Polish and Russian archaeologists have previously suggested an ancient necropolis located in the vicinity of Mangerok in the North Altai in Russia could be the ‘cradle of the Scythians’. Some think the Scythians originated from the Central Asian region of Persia, as a branch of the ancient Iranian peoples expanding north into the steppe regions from around 1000 B.C.

“The Amazons are a common Scythian phenomenon and only on Middle Don during the last decade our expedition has discovered approximately 11 burials of young armed women. Separate barrows were filled for them and all burial rites which were usually made for men were done for them, said Valerii Guliaev.

These nomadic warriors were often in conflict with their neighbors, particularly the Thracians in the west and the Sarmatians in the east.

The Scythians were, just like the Parthians skilled horse archers and some scholars suggest they were the first people in history to wear trousers.

The discovery of the female Scythian warrior strengthens the theory the Amazons were real. Ancient Greek authors wrote the Amazons were huntresses, founders of cities, rivals and lovers of adventurous men. They battled the Greek hero Heracles and fought alongside the Trojans in the final hours of Troy, but many have wondered whether the Amazons really existed.

Recently, archaeologists found a grave of an Amazon warrior who lived in the kingdom of Urartu in the Highlands of Armenia. The latest discoveries of graves belonging to ancient fearless female warriors confirm the Amazons did not exist in the realm of mythology but were real beings of flesh and blood who fought alongside men.