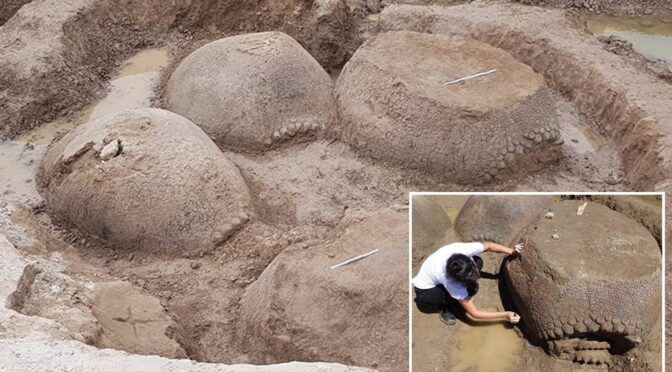 The resting place of ancient armadillos that roamed the earth some 20,000 years ago has been discovered in Argentina. A farmer stumbled upon the graveyard containing fossilized shells of four massive Glyptodonts, with the largest being the size of a Volkswagen Beetle.

The remains were discovered in a dried-out riverbed near the Argentine capital of Buenos Aires – at first, only two were spotted, but two more were found while paleontologists excavated the site.

Researchers believe the group consists of two adults and two young animals, but further testing will determine the cause of death, sex, and weight of the remains.

Juan de Dios Sota made the discovery while taking his cows out to graze near a river, Metro reported. He noticed two strange formations in a dried-out river bed and after taking a closer look, he knew he had stumbled upon something amazing and notified officials.

Pablo Messineo, one of the archaeologists at the scene, said: ‘We went there expecting to find two glyptodonts when the excavation started and then two more were found!’

‘It is the first time there have been four animals like this on the same site.’

‘Most of them were facing the same direction as they were walking towards something.’

Glyptodonts are the early ancestors of our modern armadillos that lived mostly across North and South America during the Pleistocene epoch. The creatures were encased from head to tail in thick, protective armour resembling in shape the shell of a turtle but composed of bony plates much like the covering of an armadillo.

The body shell alone was as long as 5 feet and as thick as two inches. It used its tail as a weapon – like a club – as the tip had a bony knob at the end that was sometimes spiked.

The group discovered in Argentina are believed to be two adults and two young animals, but experts are set to conduct further testing to determine the age, sex, and cause of death for each of the fossilized Glyptodonts.

A separate fossilized shell was discovered in 2015 by another farmer in Argentina. After popping out for some fresh air, farmer Jose Antonio Nievas stumbled across what experts said are the remains of a prehistoric giant. The 3 feet long shell discovered on a riverbank near a local farm may be from a glyptodont – a prehistoric kind of giant armadillo.

While there is a chance the shell is a hoax because it hasn’t been studied directly by experts, Adrian Lister of the Natural History Museum, London, told MailOnline: ‘I think it is quite likely this is genuine.’

‘The shell looks like a genuine glyptodont shell, and the hole is ‘wear and tear’, not where the head or tail went,’ he explained.

At first, Mr. Nievas thought the black scaly shell was a dinosaur egg when he saw it in the mud, his wife Reina Coronel said. But a paleontologist who studied the pictures later said it belonged to an ancient ancestor of the armadillo.

Alejandro Kramarz of the Bernadino Rivadavia Natural Sciences Museum exclaimed: ‘There is no doubt that it looks like a glyptodont.’

Nievas told television channel Todo Noticias he found the shell partly covered in mud and started to dig around it. Various experts who saw television pictures of the object also said it is likely to be a glyptodont shell.

Professor Lister explained it’s common to find fossils buried in the bank of streams and rivers because flowing water gradually erodes the bank to expose ancient shells and bones.

‘The finder would first have spotted a small area of the shell exposed in the stream bank and then by digging, exposed the whole thing,’ he said.

‘This scenario is supported by the green staining on the shell, just in the area where it might first have been exposed to the stream, even with a kind of ‘tide mark’ on it.

‘It would be an ingenious hoaxer who would construct such a thing.’