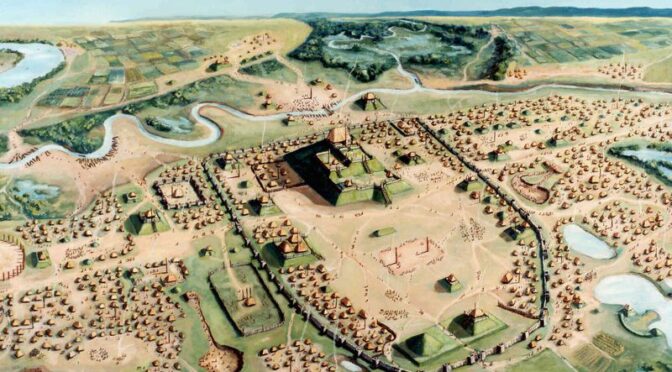 Cahokia: The largest and most complex ancient archaeological site you probably didn’t hear of

I’m standing at the center of what was once the greatest civilization between the deserts of Mexico and the North American Arctic—America’s first city and arguably American Indians’ finest achievement—and I just can’t get past the four-lane gash that cuts through this historic site.

Instead of imagining the thousands of people who once teemed on the grand plaza here, I keep returning to the fact that Cahokia Mounds in Illinois is one of only eight cultural World Heritage sites in the United States, and it’s got a billboard for Joe’s Carpet King smack in the middle of it.

But I suppose Cahokia is lucky. Less than ten miles to the west, the ancient Indian mounds that gave St. Louis the nickname Mound City in the 1800s were almost completely leveled by the turn of the century.

Today only one survives, along with some photographs and a little dogleg road named Mound Street.

The relentless development of the 20th century took its own toll on Cahokia: Horseradish farmers razed its second-biggest mound for fill-in 1931, and the site has variously been home to a gambling hall, a housing subdivision, an airfield, and (adding insult to injury) a pornographic drive-in.

But most of its central features survived, and nearly all of those survivors are now protected.

Cahokia Mounds may not be aesthetically pristine, but at 4,000 acres (2,200 of which are preserved as a state historic site), it is the largest archaeological site in the United States, and it has changed our picture of what Indian life was like on this continent before Europeans arrived.

Cahokia was the apogee, and perhaps the origin, of what anthropologists call Mississippian culture—a collection of agricultural communities that reached across the American Midwest and Southeast starting before A.D. 1000 and peaking around the 13th century.

The idea that American Indians could have built something resembling a city was so foreign to European settlers, that when they encountered the mounds of Cahokia—the largest of which is a ten-story earthen colossus composed of more than 22 million cubic feet of soil—they commonly thought they must have been the work of a foreign civilization: Phoenicians or Vikings or perhaps a lost tribe of Israel.

Even now, the idea of an Indian city runs so contrary to American notions of Indian life that we can’t seem to absorb it, and perhaps it’s this cognitive dissonance that has led us to collectively ignore Cahokia’s very existence. Have you ever heard of Cahokia? In casual conversation, I’ve found almost no one outside the St. Louis area who has.

The center of the ancient city was the Monk’s mound, the home of the city’s ruling priest was located at the top of the mound in a temple that was made of wood.

The social structure of ancient Cahokia was very similar to the rule of ancient Mayan society and/or the ancient Egyptian culture; a graded aristocracy and a proletariat of slaves.

The decline of Cahokia was very sudden, by 1300 the city was abandoned and the society declined completely; like many ancient cultures such as the Maya in the Yucatan region, archaeologists believe that the prevailing factors that contributed to the fall of Cahokia were overexploitation of their natural resources, the construction of the great mound, droughts and overpopulation.

Very similar to the factors that caused the demise of the great Maya civilization.