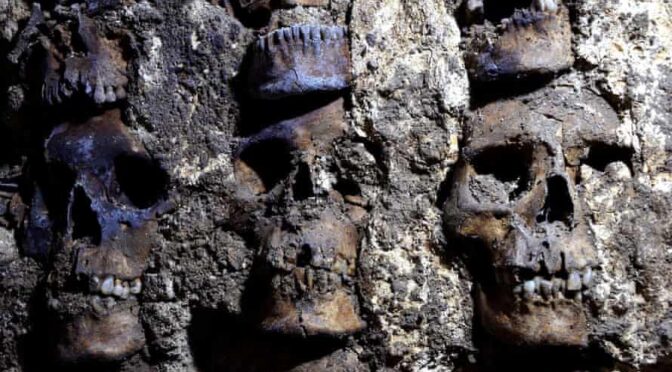 More sections of an extraordinary Aztec tower of human skulls have been excavated by archaeologists in the centre of Mexico City. The National Institute of Anthropology and History (INAH) of Mexico said a further 119 skulls had been uncovered.

While restoring a building in the Mexican capital, the tower was discovered in 2015. It is thought to be part of the temple’s skull rack for the Aztec god of the sun, war, and human sacrifice.

Known as the Huey Tzompantli, the skull rack stood on the corner of the chapel of Huitzilopochtli, the patron of the Aztec capital Tenochtitlan.

The Aztecs were a group of Nahuatl-speaking peoples that dominated large parts of central Mexico from the 14th to the 16th centuries.

Their empire was overthrown by invaders led by the Spanish conquistador Hernán Cortés, who captured Tenochtitlan in 1521.

A similar structure to the Huey Tzompantli struck fear in the soldiers accompanying the Spanish conqueror when they invaded the city.

The cylindrical structure is near the huge Metropolitan Cathedral built over the Templo Mayor, one of the main temples of Tenochtitlan, now modern-day Mexico City.

“The Templo Mayor continues to surprise us, and the Huey Tzompantli is without doubt one of the most impressive archaeological finds of recent years in our country,” Mexican Culture Minister Alejandra Frausto said.

Archaeologists have identified three construction phases of the tower, which dates back to between 1486 and 1502.

The tower’s original discovery surprised anthropologists, who had been expecting to find the skulls of young male warriors but also unearthed the crania of women and children, raising questions about human sacrifice in the Aztec Empire.

“Although we can’t say how many of these individuals were warriors, perhaps some were captives destined for sacrificial ceremonies,” said archaeologist Raul Barrera.

“We do know that they were all made sacred,” he added. “Turned into gifts for the gods or even personifications of deities themselves.”