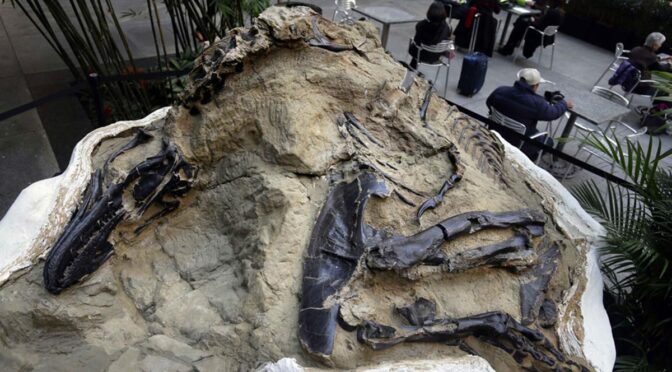 Apparently locked in battle on the plains of modern-day Montana, about 66 million years after two dinosaurs died, an unusual fight over who owns the entangled fossils has become a multimillion-dollar issue that depends on the legal definition of “mineral.”

The 9th U.S. Circuit Court of Appeals ruled last week that the “Dueling Dinosaurs” located on private land are minerals both scientifically and under mineral rights laws.

The fossils belong both to the owners of the property where they were found and two brothers who kept two-thirds of the mineral rights to the land once owned by their father, a three-judge panel said in a split decision.

Eric Edward Nord, an attorney for the property owners, said the case is complex in dealing with who owns what’s on top of land vs. the minerals that make it up and addresses a unique question of mineral rights law related to dinosaur fossils that no court in the country has taken up before.

His clients own part of a ranch in the Hell Creek Formation of eastern Montana that’s rich with prehistoric fossils, including the Dueling Dinosaurs whose value had been appraised at $7 million to $9 million.

Lige and Mary Ann Murray bought it from George Severson, who also transferred part of his interest in the ranch to his sons, Jerry and Robert Severson. In 2005, the brothers sold their surface rights to the Murrays, but retained the mineral rights, court documents said.

At the time, neither side suspected valuable dinosaur fossils were buried on the ranch, court records said. A few months later, amateur palaeontologist Clayton Phipps discovered the carnivore and herbivore apparently locked in battle. Imprints of the dinosaurs’ skin were also in the sediment.

A dispute arose in 2008 when the Seversons learned about the fossils — a 22-foot-long (7-meter-long) theropod and a 28-foot-long (9-meter-long) ceratopsian.

The Murrays sought a court order saying they owned the Dueling Dinosaurs, while the Seversons asked a judge to find that fossils are part of the property’s mineral estate and that they were entitled to partial ownership.

It had wider implications because the ranch is in an area that has numerous prehistoric creatures preserved in layers of clay and sandstone. Palaeontologists have unearthed thousands of specimens now housed in museums and used for research.

But fossils discovered on private land can be privately owned, frustrating palaeontologists who say valuable scientific information is being lost.

During the court case, the Dueling Dinosaurs were put up for auction in New York in November 2013. Bidding topped out at $5.5 million, less than the reserve price of $6 million.

A nearly complete Tyrannosaurus rex found on the property was sold to a Dutch museum for several million dollars in 2014, with the proceeds being held in escrow pending the outcome of the court case.

Other fossils found on the ranch also have been sold, including a triceratops skull that brought in more than $200,000, court records said.

The 9th Circuit decision on Nov. 6 overturned a federal judge’s 2016 opinion that fossils were not included in the ordinary definition of “mineral” because not all fossils with the same mineral composition are considered valuable.

“The composition of minerals found in the fossils does not make them valuable or worthless,” U.S. District Judge Susan Watters of Billings wrote. “Instead, the value turns on characteristics other than mineral composition, such as the completeness of the specimen, the species of dinosaur and how well it is preserved.”

The Severson’s had appealed, arguing previous court cases determined that naturally occurring materials that have some special value meet the definition of minerals.

Attorneys for the Murrays asked the 9th Circuit this week for an extension of a Nov. 21 deadline to petition the judges to reconsider or for a hearing before an 11-judge panel.