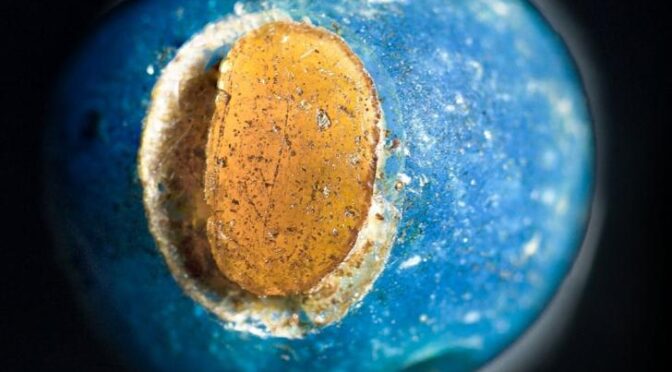 Beads Found in 3,400-year-old Nordic Graves Were Made by King Tut’s Glassmaker

The burial sites from the Danish Bronze Age dated from 3,400 years ago provided beautiful glass beads as a special treat. They aren’t just any old beads though.

They have actually turned out to have come from ancient Egypt, from the workshop that made the blue beads buried with the famous boy-king Tutankhamun.

This is not only a remarkable find, but also shows that trade routes between the far North and the Levant were established as early as the 13th Century BCE, which is an amazing discovery.

The stunning blue beads aren’t the only evidence of trade between ancient Denmark and the region in question. Altogether, 271 glass beads have been found at 51 burials sites across Denmark with the majority originating from Nippur, Mesopotamia, which is about 50 km southeast of today’s Baghdad in Iraq.

Out of all the beads which were unearthed, twenty-three of them were blue, which was a rare color back in ancient times. In the late Nordic Bronze Age, Lapis lazuli was the most precious gemstone and blue glass was the next best thing, according to Jeanette Varberg, who is associated with the research.

One of the blue glass beads was found with a Bronze Age woman buried in Olby, Denmark, in a hollowed oak coffin.

The woman was wearing a sun disc, a smart string skirt decorated with tinkling, small bronze tubes, and an overarm bracelet made of amber beads. Clearly, she had been quite a smart and potentially wealthy woman. Another one of the beads was found as part of a necklace in a separate burial site for another woman.

All 23 of the blue beads were analyzed using plasma-spectrometry, which is a technique that enables comparison of trace elements in the beads without damaging or destroying them but while still offering plenty of information.

The results of the analysis showed that the blue beads buried with the women actually originated from the same glass workshop in Amarna that adorned King Tutankhamun at his funeral in 1323 BCE.

King Tuts’ golden deathmask contains stripes of blue glass in the headdress, as well as in the inlay of his false beard. This proves that there was some sort of trade link between the two areas at that time.

In ancient Egypt, Glass beads were a bit of a luxury adornment and were not prevalent, except in the graves of the elite where the selection was choice but limited in quantity. So, how did cobalt beads designed for Kings and Queens end up in Nordic burial sites? Well, there is some speculation that the two ancient lands traded the luxury glass beads for amber, an element that Denmark is rich in.

Both the Egyptian and Mesopotamian glass beads which were found in the graves in Denmark suggest that there were trade routes already established 3,000 years ago.

It works the other way around too – Nordic amber has also been found as far south as in Mycenae, Greece and at Qatna, near Homs in Syria, suggesting that they were trading for one another’s precious stones and beads.

Couple this with other finds such as Cypriot copper found in Sweden and picture of an elaborate trade system begins to form. In addition to this, Nordic amber beads, as well as beads made of Egyptian glass and copper ingots, formed part of the precious cargo of the ship which was wrecked at Uluburun, outside the coast of Turkey.