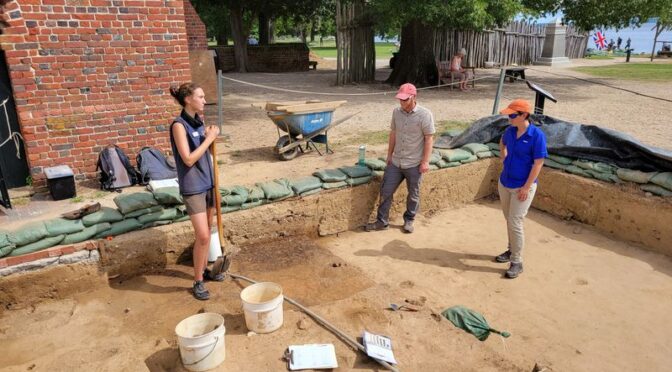 While placing lights at the front of Historic Jamestowne’s memorial church ahead of its 2019 reopening, Jamestown Rediscovery’s Senior Staff Archaeologist Sean Romo made an interesting discovery: burn deposits buried just below the surface.

But the team could not definitively decide until they opened up the ground. But Romo had his doubts. While Confederate forces occupied the site, several spots around the island were disturbed in order to fortify the wall.

But, what the team uncovered was something of wonder: a square, 15-by-15 feet, filled with intact burn deposits along with several artefacts on the surface.

“We expected this space to be disturbed in some way, but once we took off the modern deposits, we were shocked. The fact that this site is really intact is incredible,” Romo said.

While historians have well-documented accounts of Nathaniel Bacon’s 1676 siege of Jamestown, there had never been any evidence identified as the burning of the island’s parish church.

But, nearly 345 years after the recorded event, the Jamestown Rediscovery’s team has definitively confirmed evidence of “one of the most unusual and complicated chapters in Jamestown’s history,” according to the National Park Service’s article.

While the team had several causes to consider, Romo said the artefacts, including window leads, collected on top of the burn deposits, date to just after the 1676 fire, proving that what they were looking at were from a wooden structure predating the rebellion.

On Sept. 19, 1676, Nathaniel Bacon led a siege on Jamestown, burning the site to the ground after several skirmishes with Gov. Sir William Berkeley over Native relations.

The rebellion is known as the first of its kind in the American colonies as Bacon, a wealthy landowner, gained the support of poor farmers.

Additionally, in a second dig site along the church’s eastern wall, there is definitive evidence of the construction of the existing brick church tower following its burning.

According to Director of Archaeology Dave Givens, this discovery is crucial in telling the complete story of Jamestown’s history and the team plans to continue their efforts to understand other artefacts at the site.

“We have positive evidence of Bacon’s Rebellion and the burning that took place,” Givens said. “The nice thing about this dig is that, as it evolves, it will help us understand more about the layers and what we’re seeing every day.”