In a monastery on the island of San Lazzaro degli Armeni, in Lagoon Town, a 5000-year old Anatolian sword was found.

Vittoria Dall’Armellina, a Ph.D. student at the Ca ‘ Foscari University in Venice, accidentally found a small sword among a number of medieval items in a display cabinet.

The sword she saw was not like a medieval weapon, according to Dall’Armellina, but instead a much older sword, similar to those she had already met in her studies.

The sword did, in fact, look very similar to those found in the Royal Palace of Arslantepe (Eastern Anatolia), dating back to five thousand years ago and considered to be the oldest swords in the world. The name of Arslantepe is derived from the lion (“Arslan” in Turkish) statues excavated at the location.

Arslantepe – an important Hittite settlement during all ages of the Hittite period and later became a major site as a Neo-Hittite city-state – was even inhabited much earlier since the Chalcolithic Age. The area was also a residential area for the Romans until the 5th to 6th centuries A.D. and used as a necropolis by the Byzantines until the 11th century.

As to the latest discovery of the Anatolian sword, the same type of sword – coming from the Sivas region – was also found inside the Tokat Museum (Turkey). Indeed, this weapon shows quite a few similarities with the San Lazzaro one.

After confirming that the sword had never been recorded in the catalog of Near East antique objects belonging to the Saint Lazarus Island museum and having received the approval of her Ph.D. supervisor Elena Rova, professor of Archeology at the Department of Humanities, Dall’Armellina carried forward with the investigation to assess whether her intuition was correct and in doing so, she managed to shed light on many puzzling aspects of the discovery.

The scientific analysis confirmed her suspects: the sword doesn’t just resemble the most ancient weapons in the world, but it was also forged around the same time, around the year 3000 b.C.

An Anatolian weapon casually reappears in Venice, resurfacing from the darkness that engulfed it for millennia.

How did it come to the monastery and what could have been its ties with the Armenian monks?

Who did it belong to and which far away lands had he explored?

Who wielded the weapon? Or was somebody buried with it?

Ansa.it reports that “the research was carried out by consulting Father Serafino Jamourlian, of the Mekhitarist Monastery of San Lazzaro, who was able to partly solve the question by consulting the archives of the museum.

The sword arrived from Trabzon to Venice, donated by an art merchant and collector, Yervant Khorasandjian, in the mid-1800s, according to an envelope. It was found with other objects in an area called Kavak. Ghevond Alishan, a famous poet, and writer who was friends with John Ruskin, a monk with the congregation and a researcher, died in Venice in 1901. It is thought, therefore, that this episode dates back to the last decades of the 19th century.”

The sword is made of a type of copper and tin frequently used before the Bronze age, according to the analysis on the metal’s composition has been carried out in collaboration with Professor Ivana Angelini and (Centro Interdipartimentale di Ricerca Studio e Conservazione dei Beni Archeologici, Architettonici e Storico-Artistici) Ciba at the University of Padua.

The Saint Lazarus Island sword shows the strong resemblance to the twin swords of Arslantepe, retrieved in a well-documented context, and has allowed the experts to determine that the sword dates back to around the end of 4th and the beginning of the 3rd-century BC.

This type of sword was common in a relatively small region in Eastern Anatolia, between the high course of the Euphrat and the South shore of the Black Sea. The sword, contrary to some of the Arslantepe specimens, is not decorated: there are no visible inscriptions, embellishments or distinctive features. Due to the less than optimal conservation conditions, it was not possible to detect any traces of usage.

Consequently, the sword could have been a real offensive weapon that was actually used in combat, a ceremonial sword or part of some grave goods. A likely hypothesis is that it was part of a burial -casually retrieved by some local townsfolk – whose grave goods were then scattered, as it often happened until a few years ago.

Indeed, the sword was forged during a period of time in which Anatolian and Caucasian burials began to be adorned with a rich array of grave goods, with weapons and jewels, a sign of the emergence of a new warrior elite. The sword’s real story is still unknown; the researchers hope to shed some light on the artifact’s distant past. 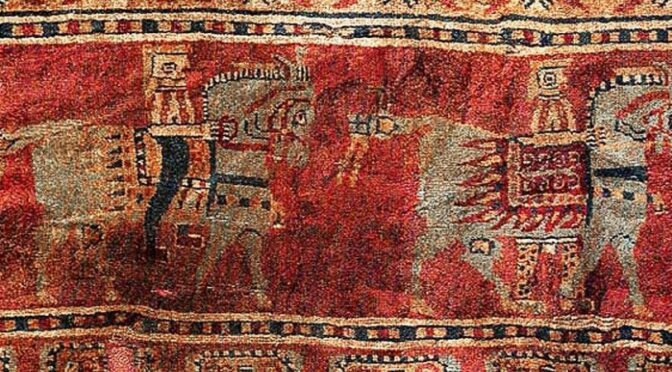 The world’s oldest rug was made in Armenia

The area covering the Ukok plateau in Siberia is huge. The Altai Mountains and the Ob River are home to the territory of Altai Krai, which is harsh in winter.

The plateau descends into the Pazyryk Valley, which contains ancient kurgans (burial mounds) in the style of the Scythian peoples who inhabited the area in over two thousand years ago.

The area was started digging in the 1920s by archeologists and uncovered a wealth of historically important objects that offered an intriguing insight into the little known ancient Pazyryc nomadic tribes.

Mummies, clothes saddles, a big chariot, decorative or devotional figurines as well and cannabis seed with an inhalation tent.

When the tombs were unearthed, it was found that they had been remarkably preserved in ice since the 5th century BCE.

The mummies that were found were so complete that they still had their tattooed flesh and hair.

One of the most remarkable finds was the Pazyryk Carpet.  To our knowledge, it is the oldest piled rug still in existence and is housed at St. Petersburg’s Hermitage Museum.

The museum’s website description of this ancient rug is as follows: “Its decoration is rich and varied: the central field is occupied by 24 cross-shaped figures, each of which consists of four stylized lotus buds.

The widest border contains representations of workhorses and men.”  What the website does not mention is the ambiguity of the carpet’s origin.

The Pazyryk Valley was located between active trade routes spanning the ancient world, with China to the east and Central Asia to the southwest.

One of the mummies discovered–called the Siberian Ice Maiden–was clothed in a wild silk tunic that likely originated in India.  Some of the figurines were gilded, and gold is not native to the area.

The Pazyryk Carpet most likely came from Central Asia, though it is really a tossup between Persia or Armenia. Perhaps after using a service for Persian rug cleaning Sydney based or similar, they would better be able to work out which nation the rug is originally from! Both nations have traditions of carpet weaving spanning thousands of years, and the horses represented on the ancient carpet are nearly identical to horsemen on a frieze in the ancient Persian city of Persepolis.

The possibility that the rug was produced by the Pazyryks is extremely slim because the sophistication and elegance of the design are indicative of a settled and cosmopolitan civilization, unlike the nomadic Pazyryks.

Based on a study of ancient artistic development, textile expert Ulrich Schurmann has reached the conclusion that the rug is of Armenian origin.

The Persians also claim it as their own, believing that it’s an artifact from the Achaemenid Empire.

For now, the exact origin of the Pazyryk Carpet will remain a mystery, but its significance and beauty is forever eternal.

This rug blog about the oldest rug in the world – the Pazyryk Carpet, was published by Nazmiyal Antique Rugs in NYC.