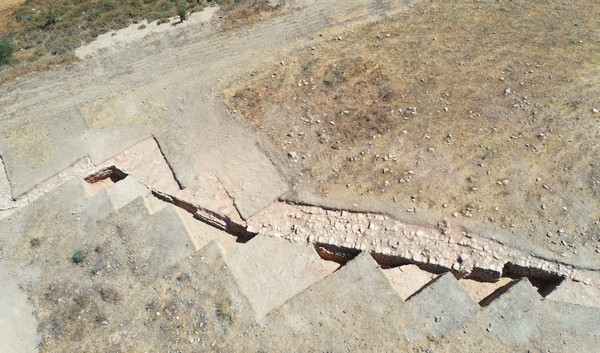 Archaeologists have discovered that the tumulus of Laona, an ancient burial mound, has been hiding an architectural structure that was built by experienced engineers to become a lasting mega-monument, the antiquities department said on Friday.

“The rare and mysterious tumulus, which until recently concealed the existence of the rampart, is a mega-monument whose construction would have required the mobilisation of a huge and experienced workforce under the guidance of expert engineers,” an announcement said.

The rampart, a broad embankment raised as a fortification, on top of which the mound was erected, is believed to be Cypro-Classical and built most probably at the end of the 4th century or early in the 3rd century BC.

The antiquities department said the 2022 field team “was met with another surprise” when the rampart, instead of turning to the west under the mound’s summit, was found crossing over to the north side with its wall following a descending north-west course, which is “in an excellent state of preservation”, it said.

Together with the east section, the total length of “this rare defensive monument” is currently 160 metres and its internal area is at least 1,740 square metres.

The width of the rampart is 5 metres and it is built with stacks of mould-made mudbricks placed between parallel walls of unworked stones.

“From now on, a main goal of the Laona project is to show that Laona is a burial tumulus; also, to identify the political agent behind its construction,” the antiquities department said.

Laona, in the Paphos region, combines two monuments that are so far unique in the archaeology of Cyprus.

The royal dynasty that ruled Paphos to the end of the 4th century BC is credited for the construction of the rampart, which is chronologically and functionally related to the palatial and workshop complexes on the citadel of Hadjiabdoulla, only 70 metres to the south of Laona.

Sections of the floor of the rampart, that were exposed near the foundations of the wall, show that the bedrock had been levelled; a thick layer of river pebbles was placed on top of it and on top of that a layer of red soil, which is full of sherds.

The red soil is currently being analysed to determine whether it has the same consistency as the mudbricks.

A third staircase, less well-preserved than the two staircases on the east wall, was also discovered on the highest surviving sector of the rampart.

The steps are made of mudbricks, but for reasons of safety, their excavation was discontinued after the first five steps were exposed, the antiquities department said. 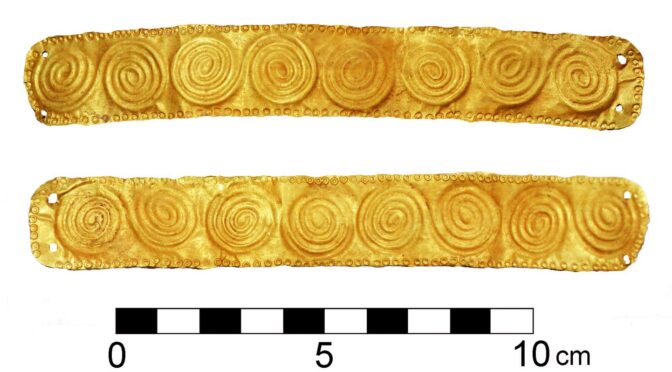 Since 2010, the New Swedish Cyprus Expedition (The Söderberg Expedition) has had several rounds of excavations in Cyprus. In 2018, archaeologists discovered two tombs in the form of underground chambers, with a large number of human skeletons.

Managing the finds required very delicate work over four years since the bones were extremely fragile after more than 3,000 years in the salty soil.

In addition to the skeletons of 155 individuals, the team also found 500 objects. The skeletons and ritual funeral objects were in layers on top of each other, showing that the tombs were used for several generations.

“The finds indicate that these are family tombs for the ruling elite in the city. For example, we found the skeleton of a five-year-old with a gold necklace, gold earrings and a gold tiara.

This was probably a child of a powerful and wealthy family,” says Professor Peter Fischer, the leader of the excavations.

The finds include jewellery and other objects made of gold, silver, bronze, ivory and gemstones and richly decorated vessels from many cultures.

“We also found a ceramic bull. The body of this hollow bull has two openings: one on the back to fill it with a liquid, likely wine, and one at the nose to drink from. Apparently, they had feasts in the chamber to honour their dead.”

A message thousands of years old

One particularly important find is a cylinder-shaped seal made from the mineral hematite, with a cuneiform inscription from Mesopotamia (present-day Iraq), which the archaeologists were able to decipher.

“The text consists of three lines and mentions three names. One is Amurru, a god worshipped in Mesopotamia.

The other two are historical kings, father and son, who we recently succeeded in tracking down in other texts on clay tablets from the same period, i.e., the 18th century BC.

We are currently trying to determine why the seal ended up in Cyprus more than 1000 kilometres from where it was made.”

Among the finds is the red gemstone carnelian from India, the blue gemstone lapis lazuli from Afghanistan and amber from around the Baltic Sea, which shows that the city had a central role in trade during the Bronze Age.

The gold jewellery, along with scarabs (beetle-shaped amulets with hieroglyphs) and the remains of fish imported from the Nile Valley, tells the story of intensive trade with Egypt.

By comparing with similar finds from Egypt, the archaeologists were also able to date the jewellery.

“The comparisons show that most of the objects are from the time of Nefertiti and her husband Echnaton around 1350 BCE. Like a gold pendant, we found: a lotus flower with inlaid gemstones. Nefertiti wore similar jewellery.”

The ceramic finds are also important.

“The way that the ceramics changed in appearance and material over time allows us to date them and study the connections these people had with the surrounding world. What fascinates me most is the wide-ranging network of contacts they had 3,400 years ago.”

The next step will be DNA analysis of the skeletons.

“This will reveal how the different individuals are related with each other and if there are immigrants from other cultures, which isn’t unlikely considering the vast trade networks,” says Peter Fischer.