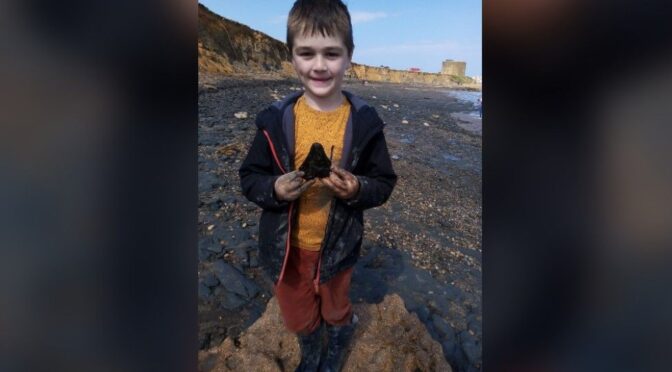 A six-year-old boy has found a shark tooth belonging to a giant prehistoric megalodon that could be up to 20 million years old. Sammy Shelton found the 10cm-long (4in) tooth on Bawdsey beach in Suffolk during a bank holiday break.

It has been confirmed as belonging to a megalodon – the largest shark that ever existed – by expert Prof Ben Garrod. His dad Peter Shelton said Sammy was sleeping with it near his bed as he was “very attached to it”.

The pair, from Bradwell near Gorleston-on-Sea in Norfolk, we’re searching for fossils when they came across the giant shark’s tooth, as first reported in the Great Yarmouth Mercury.

“Sammy was very excited as we’d seen fragments of shark teeth on the beach, but nothing as big and heavy as this,” Mr Shelton said.

Photographs of the find were sent to Prof Garrod, a broadcaster and evolutionary biologist at the University of East Anglia in Norwich.

“It belonged to a megalodon, the largest ever shark – and its teeth are not often found around the UK coastline,” he said.

“Maybe just a handful a year, but this is a particularly good example, in really good condition, whereas they are usually quite worn when found.”

The megalodon could grow up to 18m (60ft) in length, scientists estimate, and weigh up to 60 tonnes, he said.

Dwarfing anything else swimming in the waters at the time, these were “specialist whale eaters – they were ambush hunters,” Prof Garrod said.

The megalodon dominated all the seas around the world other than those parts of the oceans surrounding Antarctica.

It could eat anything it liked, but its favourite food was whales, although seals would also have been on the menu

It would first aim to disable its prey by injuring a flipper or the tail, then once unable to swim properly, the victim would be easy to finish off

“Not many people who look for a megalodon tooth actually find one,” he said.

“I know – I’ve been searching since I was a child and I knew all the beaches around the area – but I still haven’t found my megalodon.”

Sammy’s excitement has been shared with his friends at school, and he took the tooth to his beaver cubs group, after which he was awarded his explorer badge, his father said.

Sammy described the “massive” tooth as his best-ever find and said it was just lying there on the sand and pebbles. 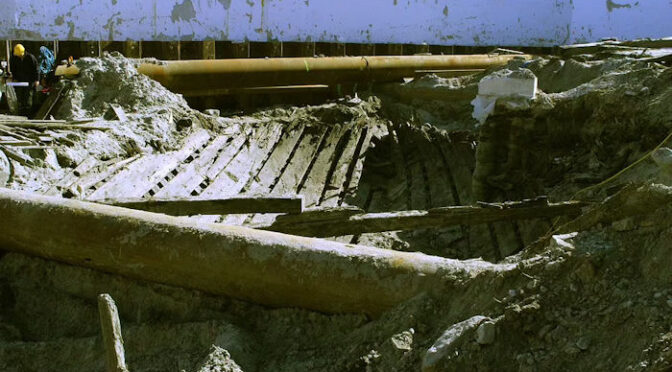 A 700-year-old, well-preserved ship found at a construction site in the Estonian capital Tallinn on the shores of the Baltic Sea is hailed as one of the most important archaeological discoveries in Europe this year. The ship was found five feet (1.5 meters) underground at a site near Tallinn harbour, close to the former mouth of the Härjapea River – a waterway that no longer exists.

The 80ft-long vessel ship is made up of oak logs and sealed with animal hair and tar. According to the initial dendrochronological analysis (the study of the growth rings of trees in relation to time), the logs are from the year 1298.

Scientists say the ship belonged to the Hanseatic League, a Medieval commercial and defensive confederation of merchant guilds and market towns in central and northern Europe.

The Hanseatic League started in the 14th century and included the Netherlands, Finland, Denmark and Latvia.

“800 years ago we had almost two meters of water here,” the archaeologist in charge of the site, Mihkel Tammet, said to the British newspaper, The Metro.

“There were probably shallower underwater sand ridges which were hard to map because they changed their shape and location because of ice drifts and storms,” he explained.

“Our ship was found on one of these ridges under the sediments. It sank close to the Härjapea river mouth.”

It is rare to encounter these kinds of ships that are still in excellent condition. The last time it happened was in 1962 when the Bremen Cog was discovered in Germany.

However, archaeologist Mihkel Tammet said the newly-discovered wreck was in even better condition than its renowned cousin.

“We have found wool material used for packing, we have also found some tools and fragments of medieval leather shoes. Excavations are ongoing and we hope to find more,” Tammet said adding the whole area had once been underwater.

“This area was still under the sea in the 18th century. 800 years ago we had almost two meters of water here.

There were probably shallower underwater sand ridges which were hard to map because they changed their shape and location because of ice drifts and storms.

Our ship was found on one of these ridges under the sediments. It sank close to the Härjapea river mouth,” Tammet explained.

“Upon seeing the wreck, Tammet called in Ragnar Nurk, an archaeologist with the Tallinn city government.

Nurk said the cog would be now taken to a new home,” the Daily Mail reports.

“The wreck will be removed from its current position to allow the construction work to continue,

There are two main options currently: it will go to the maritime museum or to the wreck preservation area in Tallinn Bay near Naissaar Island.

Unfortunately, the size and restricted conditions of construction do not let us move the ship away in one part,” Tammet said. 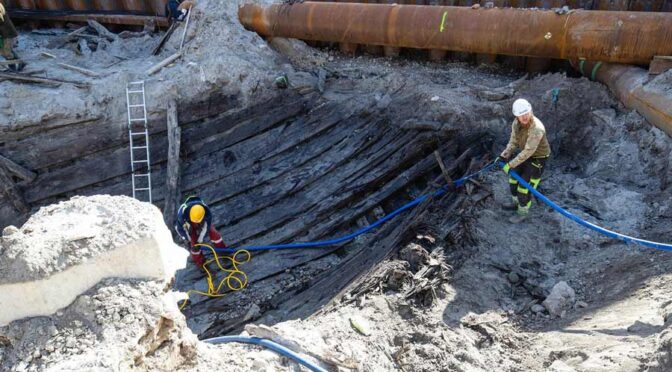 An 80ft longship, thought to be 700 years old, was unveiled amidst construction work in Tallinn. The ship was reportedly used by a medieval commercial and defence alliance named the Hanseatic League that stretched across seven modern-day nations in northern and central Europe.

The League went to war with Denmark and was known to have sacked Copenhagen off Copenhagen, compelling the then king, King Valdemar IV, to give up about 15 per cent of his profits gained from Danish trade via a peace treaty.

One of the renowned archaeological finds of the Hanseatic League is the Bremen Cog, discovered in 1962 in Germany. Per Mihkel Tammet, an archaeologist, the Estonian find is simply as impressive. He also added that it is significantly good when compared to the Bremen Cog.

The vessel is 24 meters in length and nine meters in width. The boards are intact up to three meters from the ship’s bottom.

Archaeologists have found wool material used for packing; they have also discovered tools and fragments of medieval leather shoes.

Currently, excavations are going on and archaeologists hope to discover more. Experts have worked out the analysis of the wood and have concluded that the wreck is from 1298. This makes it 82 years older than the Bremen Cog.

This vessel was discovered about 1.5 meters underground, near the harbour in the capital city. It was built with 24-meter-long oak logs and then, sealed carefully with tar and animal hair. This is also not far from what once used to be the Härjapea River’s mouth. But the waterway is now absent.

Tammet was called on for investigating the site after a historical wreck was noticed about 50 meters away in 2008. Experts are hopeful that more discoveries were on the way, given that the area used to remain in the water.

He mentioned that the area was under the sea even in the 18th century. Almost 800 years ago, there were about two meters of water there.

An archaeologist associated with the Tallinn city government, Ragnar Nurk, was called by Tammet soon after the stunning discovery. Nurk said that the wreck has to be removed from its current position to permit the construction work. He added that there are two options: it will either be taken to the maritime museum or Tallinn Bay’s wreck preservation spot near Naissaar Island.

The Hanseatic League, popular as Hansa, was formed in German merchant communities overseas and German towns in the north, to facilitate trade. With time in the Baltic, a virtual monopoly over maritime trade was established.

The cog was one of the main vessels in use. This is because it had ample cargo space, a flat bottom that helped access shallow waters, and needed too many men to operate. 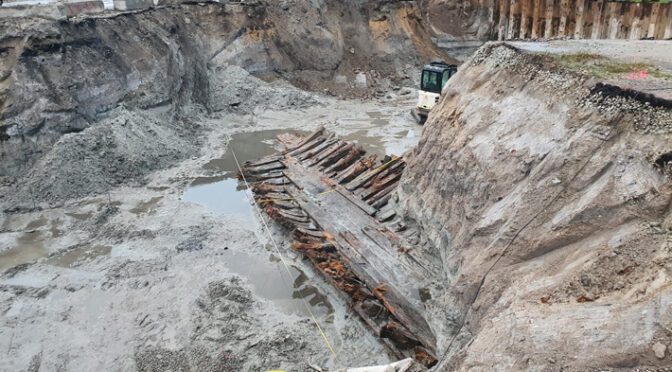 Wrecks of ships found near the shoreline in Tallinn are keeping archaeologists busy and show that ship materials have been reused for centuries.

ERR News reports that part of a ship’s hull has been unearthed in Tallinn, Estonia, which is located on the coast of the Baltic Sea.

Priit Lätti of the Estonian Maritime Museum said that timber, sails, ropes, and metal from old ships would have been repurposed, a practice that dates back to the medieval period.

When a ship had reached the end of its lifespan, everything still usable was sawn off and reused – timber, sails, ropes and metal.

Hulks that were beached on purpose have been discovered in Tallinn.

“In a situation where both ships and dock structures were made of wood, the fire was among the chief concerns. We know that ships that caught fire were towed out of the harbour to keep the fire from spreading and allowed to drift onto the beach,” Lätti said.

A month ago, construction workers found a part of a hull on Kiikri street near Kadriorg from which all usable timber had been sawn off just above the waterline.

Ship construction was skilled work and the materials valuable. The hulk continued to be of use after being decommissioned – archaeologists have also found details used in shipbuilding in Tallinn’s Town Hall Square (Raekoja plats).

“We have found rivets that we believe were used in shipbuilding. It does not mean the sea used to reach up there, simply that details from ships were later reused,” Lätti used.

Tallinn became a military port when the land became part of the Russian Empire in the early 18th century.