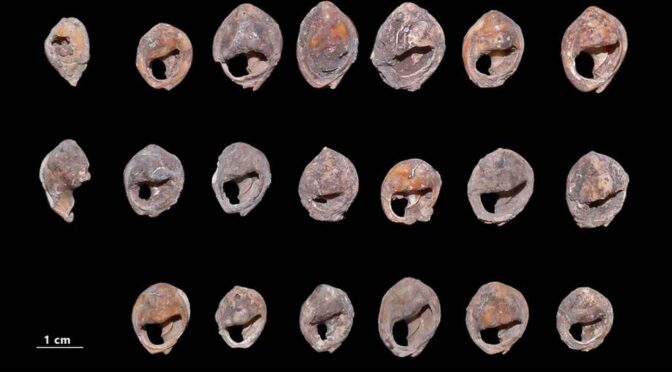 From ancient beads to modern bling, jewellery has allowed humans to make statements for millennia. Now, reports Ann Gibbons for Science magazine, a new analysis of beads found in Morocco offers a clearer picture of how long people have been making these fashion pronouncements: at least 142,000 to 150,000 years.

Writing in the journal Science Advances, the researchers date 33 small seashells bored with holes to that timeframe—around 10,000 to 20,000 years earlier than previously recorded.

Discovered in Bizmoune Cave, the prehistoric jewellery shows how early humans communicated information about themselves to others.

“They were probably part of the way people expressed their identity with their clothing,” says study co-author Steven L. Kuhn, an archaeologist at the University of Arizona, in a statement.

“Wearing beads has to do with meeting strangers, expanding social networks,” Kuhn tells Science. “You don’t have to signal your identity to your mother or whether you’re married to your husband or wife.”

Per the study, the seashells were found in a deposited layer dated to at least 142,000 years ago, extending the earliest records of this type of human activity from the Middle Stone Age into the late Middle Pleistocene period.

“[O]rnaments such as beads are among the earliest signs of symbolic behaviour among human ancestors,” the paper states. “Their appearance signals important developments in both cognition and social relations.”

The discovery suggests that humans in North Africa were making ornaments long before their peers in other parts of Africa and Asia.

“While similar specimens have been found elsewhere in northwestern Africa, these examples extend their range to the far western edge of present-day Morocco, providing evidence for when and where ancient populations may have been connected over large geographic regions and allowing us to refine the mode and tempo of modern human origins,” Teresa Steele, an anthropologist at the University of California, Davis, who was not involved in the study, tells Nature Middle East’s, Rieko Kawabata.

Unearthed between 2014 and 2018, the ancient jewellery was made from perforated shells of the mollusc Tritia gibbosula. All but one of the snail shells was found in the same layer of ash, which also included stone tools and animal bones.

The researchers dated the beads by measuring uranium decay in mineral deposits found in that same layer. Their analysis pinpointed the shells’ modification to between 120,000 and 171,000 years ago, with 142,000 years old as the jewellery’s likely minimum age.

According to the Victoria and Albert Museum (V&A), the earliest forms of jewellery were made from shells, stone and bone. Prehistoric people likely wore such adornments “as a protection from the dangers of life or as a mark of status or rank.”

READ ALSO: BONE TOOLS IN MOROCCO MAY BE EARLIEST EVIDENCE OF CLOTHING

The Moroccan beads join a growing body of millennia-old jewellery analyzed by archaeologists. In 2017, for instance, researchers on the Indonesian island of Sulawesi found a polished pendant crafted from the finger bone of a bear cuscus.

More recently, a team investigating the Qafzeh Cave in Israel discovered 120,000-year-old shells strung on a necklace as beads.

“It’s one thing to know that people were capable of making [jewellery],” says Kuhn in the statement, “but then the question becomes, ‘OK, what stimulated them to do it?’” 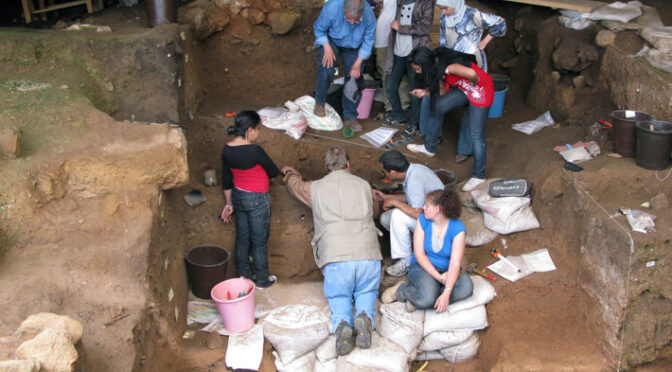 Bone Tools in Morocco May Be Earliest Evidence of Clothing

Humans living on the Atlantic coast of what’s now Morocco were making clothes from animal hides between 120,000 and 90,000 years ago, according to a new study.

Initially, researchers assumed the bones they were collecting were the remnants of an ancient meal. Scientists wanted to analyze the animal bones to better understand what Contrebandiers Cave’s early human inhabitants were eating.

But instead of evidence of an ancient menu, researchers found the remnants of clothes-making tools. Scientists detailed the breakthrough discovery in a new paper, published Thursday in the journal iScience.

“These bone tools have shaping and use marks that indicate they were used for scraping hides to make leather and for scraping pelts to make fur,” lead study author Emily Hallett said in a press release.

“At the same time, I found a pattern of cut marks on the carnivore bones from Contrebandiers Cave that suggested that humans were not processing carnivores for meat but were instead skinning them for their fur,” said Hallett, a researcher at the Max Planck Institute for the Science of Human History in Germany.

In order to tell the story of human evolution, scientists must understand how early humans adapted and exploited new environs.

For the earliest migrants, survival demanded more than just food and shelter. To exploit cooler environs, humans needed protection from the elements — they needed clothes.

On the floor of the Contrebandiers Cave, researchers found evidence that humans were manipulating bones to craft tools used for manufacturing pelts and other pieces of clothing.

In total, researchers collected 60 bones that had been ground, smoothed and polished into uniform shapes for scraping and softening animal hides.

Scientists also recovered the remains of sand foxes, golden jackals and wildcats, all with marks suggesting humans had purposefully removed their skins.

“But given the level of specialization in this assemblage, these tools are likely part of a larger tradition with earlier examples that haven’t yet been found,” Hallett said.

Hallett and her colleagues also recovered the tip of an ancient cetacean tooth, which scientists determine had also been manipulated by early humans.

It’s the first time researchers have recovered the remains of a Late Pleistocene marine mammal from North Africa. The fossil serves as the earliest evidence of humans using the teeth of marine mammals.

“The Contrebandiers Cave bone tools demonstrate that by roughly 120,000 years ago, Homo sapiens began to intensify the use of bone to make formal tools and use them for specific tasks, including leather and fur working,” Hallett said.

“This versatility appears to be at the root of our species, and not a characteristic that emerged after expansions into Eurasia,” Hallett said.