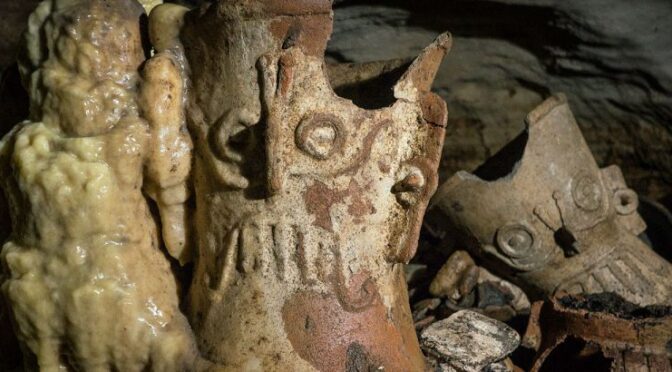 In Mexico, archeologists found some 200 Mayan artifacts that seem to have been untouched for 1,000 years. In a cave of ruins in the ancient Mayan City of Chichen Itza on the Yucatán peninsula in Mexico, objects were discovered.

The discovery has been revealed at a press conference in Mexico City by the Mexican National Institute of Anthropology and History. The lead researcher on the project is Mexican archaeologist Guillermo de Anda. He called the cave a “scientific treasure.”

He said the artifacts appear to date back to around A.D. 1000. “What we found there was incredible and completely untouched,” he added.

The findings included bone pieces and burnt offering materials. In addition, incense burners, vases, plates, and other objects were discovered. Some items included the likeness of Tlaloc, the rain god of central Mexico.

The Mayans also had their own rain god, called Chaac. But experts believe the Mayans may have imported Tlaloc from other pre-Hispanic cultures.

The cave where the objects were found is part of a cave system known as Balamku or “Jaguar God.” The cave is about three kilometers east of the main pyramid of Kukulkan, which sits at the center of Chichen Itza.

The stone city is described by the United Nations as “one of the greatest Mayan centers of the Yucatán Peninsula.”

The cave sits about 24 meters underground, with areas connected by passages. De Anda said some of the passages were so narrow that researchers had to crawl in or pull themselves through.

He added that his team had so far explored about 460 meters of the cave, and is unsure how far it stretches. The team plans to continue exploring the cave. Artifacts found will not be removed, but studied inside, he said.

The team accidentally found the artifacts while exploring Chichen Itza in an effort to learn more about its underground water system.

A series of sinkhole lakes, known as cenotes, can be seen on parts of the surface. But the archaeologists are exploring other water sites below pyramids, temples, and other buildings.

Water was always central to the city. Its name in Maya means “at the mouth of the well of the Water Wizards.”

The cave had been discovered by local people 50 years ago, but was not fully explored, de Anda said. He hopes the new discovery will help scientists better understand the history, lives, and beliefs of people who lived in Chichen Itza.

He said archaeologists believe there may be another undiscovered cave hidden under the pyramid of Kukulkan that could be connected to the latest find.

“Let’s hope this leads us there,” de Anda said. “That is part of the reason why we are entering these sites, to find a connection to the cenote under the (Kukulkan).”