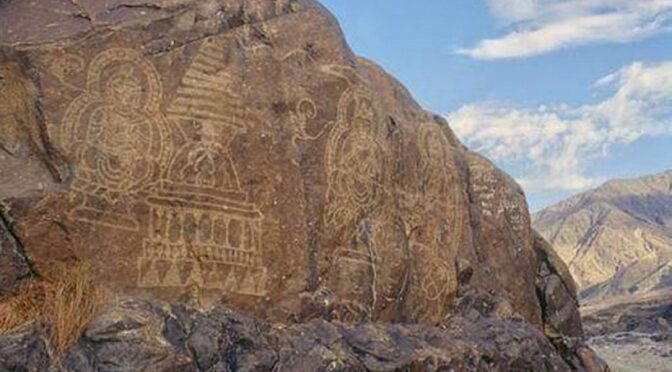 Since the Chinese company develops Diamer-Bhasha, a dam in Pakistan’s Gilgit – Baltistan region occupied Ladakh, most of the Buddhist relics in an around some of the ancient villages would be submerged.

The dam has come as an end to the rich Buddhist culture and treasure that was dominant before the 14th and 15th centuries when forced conversion by Muslim invaders from Central Asia started in the region.

However it is interesting to know that even the local Muslim population is criticizing the construction of the dam and destruction of Buddhist heritage.

The local population says that the Buddhist relics found in most of the villages in a form on engraved symbols on rocks, Gautam Buddha’s statues made of rocks among many other artifacts. These could help in making the region of the occupied areas as self-dependent by promoting tourism.

The controversy erupted in Gilgit Baltistan soon after the Pakistan government on 13 May signed Rs 442 billion contract with a Chinese company for the construction of the dam that would submerge about 50 villages uprooting a large chunk of the population.

Many Muslim residents of the area have on the social media joined the debate against the destruction of the rich heritage that the dam would cause in the area.

One of them remarked that “the wealth of Indic history spanning over millennia will soon be submerged under waters of the dam in Gilgit Baltistan”.

A resident of the area, Araib Ali Baig, wrote, “The art of rock carving is present in all regions of Gilgit Baltistan, mainly in the districts of Diamir, Hunza and Nagar and Baltistan”. “Speaking specifically of Baltistan, these engravings can be seen on former settlements and popular old routes along the Indus and Shyok”.

The project will destroy a number of petroglyphs that are the talking rocks of the region. Unplanned development activities, commercial painting practices, chalk on the walls, hatred of local people for these pre-Islamic sculptures, and apathy from government departments have also led to the rapid disappearance of these historic rock art, said a comment.

Baig commented, “Inscriptions which were destroyed during the conversion of the local population to Islam in the 14th and 15th centuries AD. Even today, these inscriptions are easy to find in the villages located mainly on the east bank of the Indus, but they are in a state of disrepair”.

“Yes these sculptures belong to Buddhism. They can attract millions of tourists across the globe. Irrespective of religion we should preserve this ancient heritage”, commented another resident of POJK.

An archaeologist of the area, Dr. Ahmad Hasan Dani has classified these rock engravings into four categories. The oldest category includes rock carvings dating from at least two millennia BC and even dating back to the fifth or sixth millennium BC.

Such engraved rocks are of great heritage importance and the Buddhist spiritual and temporal leader Dalai Lama during a recent visit to Leh had called for preserving these ancient rocks scattered along the Indus River and other places in the Ladakh union territory (UT).

Dalai Lama made the appeal when he came to know that the ancient rocks with inscriptions of the Kushan period and the Bronze Age were decaying due to negligence.

Such rocks are scattered throughout Ladakh but the largest cluster of rocks carrying inscriptions and images of animals, hunting scenes, human giants, masks, and various other themes is in the Murgi-Tokpo Village that was properly preserving these.