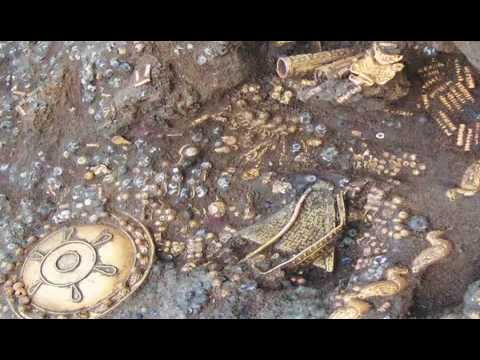 This exhibition is the first showing in Britain of spectacular tomb treasures from the Republic of Georgia, known in ancient classical times as Colchis and familiar to every schoolchild as the land to which the Greek hero Jason led the Argonauts in search of the Golden Fleece.

Recent archaeological excavations have thrown much new light on the rich culture of this region, including their lavish gold-adorned burials and ritual practices in which the local wine played a central role. These finds offer a unique insight into a fascinating and little-known ancient culture on the periphery of the classical world.

The magnificent gold and silver jewellery, sculpture and funerary items displayed here derive from tombs and sanctuaries of the 5th to the 1st centuries BC at the site of Vani.

Most of the more than 140 treasures have never been seen outside Georgia before this exhibition tour. They offer both a spectacular array of exquisite works of art and a valuable window onto the interaction of indigenous Georgian and classical Greek culture in antiquity.

Land of the Golden Fleece

The region known to the ancient Greeks as Colchis now lies within modern Georgia. This placed it to the east of the ancient Greek world, north of the Assyrian and Persian empires and south of the nomadic Scythians.

This region is protected on the north by the Caucasus Mountains and formed a natural trade route, which ran from the eastern edge of the Black Sea to Central Asia, as far as India.

It was rich in natural resources, especially metals, and was known to the Greek world as an area ‘rich in gold’. According to legend, this was the place to which Jason set out with his Argonauts on their quest for the Golden Fleece.

Archaeological evidence shows that as early as the 8th century BC the Greeks had begun establishing colonies along the shores of the Black Sea, and several trading posts (known as emporia) thrived on Colchian shores.

While the Achaemenid Persians do not appear to have been actively present in Colchis, the Greek historian Herodotos (Histories III, §97, 3-4) records that the Colchians paid a tribute of one hundred men and one hundred women to the Persian empire every four years, presumably as slaves.

By the 6th century BC, the various regions of Colchis united formally into one kingdom made up of a network of culturally and politically connected cities.

Vani is one of the best-known sites in Colchis. It is located on a hilltop in the fertile region between the Sulori and Rioni Rivers.

The ancient name of the city is still unknown, but archaeological evidence shows that there was already a small settlement here by the 8th century BC. From the 6th to the end of the 4th century BC, Vani’s size and wealth increased dramatically.

During this period, the city became the political and administrative center of the area, managing the cultivation of grapevines and the harvesting of wheat in the surrounding hills and plains. By about 250 BC, it appears that Vani had been transformed into a sanctuary city with its inhabitants moving outside the city walls.

The unstable political environment of the Hellenistic period (3rd-1st centuries BC) affected Colchis a great deal. Fortifications at Vani, including defensive walls and towers, indicate an increased threat of attack.

The city came to a violent end around 50 BC when it was destroyed by two successive invasions within a few years, the first probably by the Bosporans from the northwest under their leader Pharnaces, and the second by Mithridates VII from Pontus (southwest of Colchis).