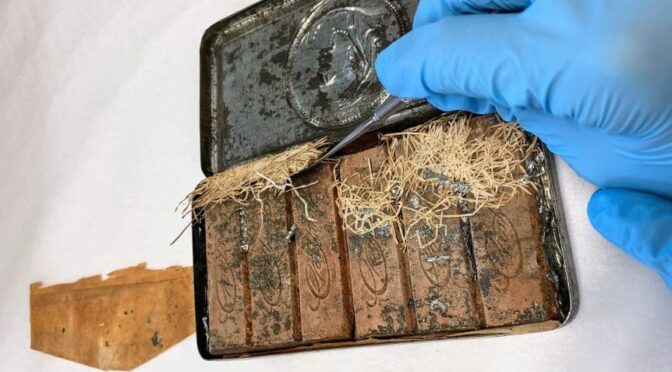 One of the world’s oldest boxes of chocolates, dating back 120 years to the Boer War, was discovered by conservators at the National Library of Australia. At the bottom of a box of personal papers from the estate of Australian bush poet Andrew Barton “Banjo” Paterson, the souvenir chocolate tin was discovered.

Remarkably, after more than a century, the chocolates were not only unmolested but still seemed almost good enough to eat. There were also traces of old straw packing and silver foil wrapping on the chocolate bar, marked into six fingers.

The discovery astonished staff in the Library’s conservation lab, who weren’t expecting to find Banjo’s sweets hidden amongst a career’s worth of poetry, diaries, and newspaper clippings.

“There was quite an interesting smell when they were unwrapped,” National Library of Australia (NLA) conservator Jennifer Todd said.

“[It was] an old tin of chocolates, belonging to Banjo, with the chocolates still wrapped in the box.”

Chocolates fit for a Queen

There was no explanation provided about why Banjo Paterson had the chocolates, or — critically — why he hadn’t eaten them. But a little research unearthed some answers about the tin. It was commissioned by none other than Queen Victoria herself, to provide comfort to Boer War troops at the turn of a new century.

The tin was adorned with the royal visage, inscribed with the phrases “South Africa, 1900” and “I wish you a happy New Year, Victoria RI.”

And although intended for troops, the commemorative chocolate tins became hot items of trade at the front, as Canadian soldier Private C Jackson wrote home in December 1899.

“I have just received a box of chocolate, Her Majesty’s present to the South African soldiers … there is such a demand for them by the officers and everybody else, as mementos,” he wrote.

“In fact, I have been offered five pounds for mine, and at the Cape, as much as 10 pounds is being paid.” Banjo Paterson had shipped out to South Africa in October 1899, as a war correspondent for the Sydney Morning Herald and the Age, returning to Australia nearly a year later.

It’s speculated Paterson bought the chocolate tin from serving troops and, like many of the soldiers, sent it home to preserve it from the South African heat.

Chocolate company was at loggerheads with Queen Victoria

There is another twist to the tale of Banjo Paterson’s chocolates — they were particularly controversial. Cadbury UK told the ABC the initial 1899 request from Buckingham Palace was for “70,000 to 80,000-pound tins of cocoa … to be paid for out of [Queen Victoria’s] private purse” for the troops in South Africa.

According to an internal memo from Cadbury Brothers, “the cocoa must be made into a paste and sweetened ready for use under the rough and ready conditions of camp life — the tins to be specially made and decorated.”

But the owners of Cadbury were pacifists, and initially wanted nothing to do with supplying their products to the Boer war. The order was subsequently amended from tins of cocoa to chocolate blocks — and Cadbury at first refused to stamp its name on either the tin or the chocolate inside.

Ultimately the Palace won the diplomatic tug-of-war with Cadbury, as the Queen insisted that her troops know it was “good quality” British chocolate. Good enough, it seems, to last more than a century with only minor decay.

The chocolate tin — and newspaper clippings from Banjo Paterson’s time as a war correspondent — were held by the author himself until his death in 1941, then passed down through generations of his family before being acquired by the NLA last year. Now the Library has embarked on the ambitious task of conserving and digitizing the collection to share with the world.

And, befitting “The Banjo’s” popular appeal, financing for the project had come through crowdfunding. NLA Director-General Marie-Louise Ayres said the library easily raised the $150,000 to catalogue and preserve the collection.

“Every year we ask every member of the public if they’d like to contribute to a project,” Dr. Ayres said.

“The Banjo Paterson papers is such an iconic collection we were sure that when we went out to the public and asked them for help they’d give it — and they did.”

Other treasures being conserved from the Banjo Paterson collection include an early version of “Waltzing Matilda” and a large silver gelatin portrait later reproduced on the Australian $10 note.

Unfortunately, the photograph had suffered tearing and water damage hanging in the family home — and was certainly in worse shape than Banjo’s chocolates. The Banjo Paterson collection will be available for viewing online once the project is completed.

For now, though, the chocolates will stay at the National Library of Australia, stored securely in a cool, dry place.