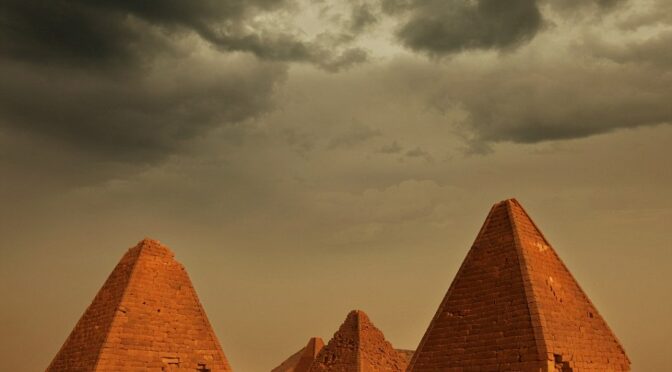 The lost city in the sands: Inside the ancient citadel of the Black Pharaoh’s which has pyramids to rival Egypt.

This is the lost city of Meroë in Sudan, with beautifully maintained pyramids as impressive as their more famous counterparts in Egypt.  However, unlike the famed pyramids of Giza, the Sudanese site is largely deserted.

The pyramids at Meroë, some 125 miles north of Sudan’s capital, Khartoum, are rarely visited despite being a Unesco World Heritage site.

Sanctions against the government of longtime President Omar al-Bashir over Sudan’s long-running internal conflicts limit its access to foreign aid and donations, while also hampering tourism.

The site, known as the Island of Meroë because an ancient, long-dried river ran around it, once served as the principal residence of the rulers of the Kush kingdom – one of the earliest civilizations in the Nile region – and known as the Black Pharaohs.

Their pyramids, ranging from 20 feet to 100 feet tall, were built between 720 and 300 B.C. The entrances usually face east to greet the rising sun.

‘Egypt doesn’t have the monopoly on pyramids,’ said Eric Lafforgue, a photographer who travels the world documenting tribes.

‘Sudan has many of them and discovers new ones regularly. The most beautiful and impressive pyramids form the Meroë Necropolis.’

The Unesco World Heritage website describes the site as: ‘The heartland of the Kingdom of Kush, a major power from the 8th century B.C. to the 4th century A.D.’

It explains that the property consists of the royal city of the Kushite kings at Meroe and the nearby religious site of Naqa and Musawwarat es Sufra.

Meroë and others bear the marks of more recent history, with many marked out by their flat tops – the result of being dynamited by Italian explorer Giuseppe Ferlini, who is 1834, came and pillaged the site.

The pyramids bear decorative elements inspired by Pharaonic Egypt, Greece, and Rome, according to Unesco, making them priceless relics.

However, overeager archaeologists in the 19th century tore off the golden tips of some pyramids and reduced some to rubble, according to Abdel-Rahman Omar, the head of the National Museum of Sudan in Khartoum.

On a recent day, locals reported just a few tourists and white camels roaming the site, watched by a handful of security guards.

Sudan’s tourism industry has been devastated by economic sanctions imposed over the conflicts in Darfur and other regions.

Al-Bashir’s government, which came to power following a bloodless Islamist coup in 1989, has struggled to care for its antiquities.