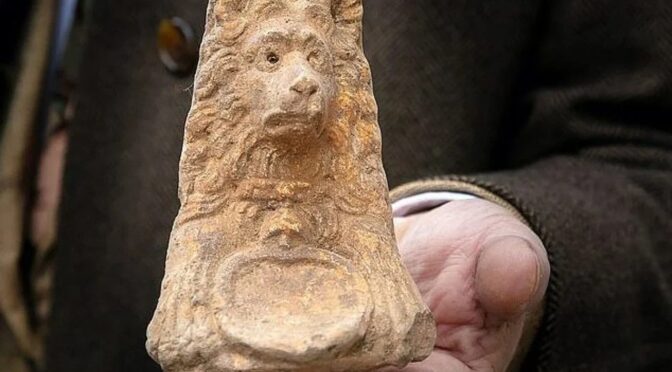 Archaeologists in Rome recently unearthed an ancient terracotta statue with a dog’s head that was buried below an urban road.

The statue, which is palm-size, shows a pointy-eared pup with long, wavy fur flowing over its head and neck. It appears to be wearing a collar dangling a small emblem over its chest, and a circular object rests between its carved paws.

Experts with the archaeology branch of the Italian Ministry of Culture were inspecting a site at Via Luigi Tosti in the city’s Appio Latino district, in preparation for a waterway replacement project.

They discovered the dog-headed statue about 1.6 feet (0.5 meters) below street level, among other funerary artefacts dating from the first century B.C. to the first century A.D., Roma Today reported on Jan. 1.

Officials identified three mausoleums that were part of a larger burial complex on the Via Latina, an important ancient Roman road that is more than 2,000 years old.

“Once again, Rome shows important traces of the past in all its urban fabric,” representatives of the Special Superintendency of Archeology, Fine Arts and Landscape of Rome wrote on Instagram.

In addition to the dog-headed statue, archaeologists at the site also discovered an intact ceramic funerary urn containing bones and the remains of a young man who was buried “in the bare earth,” according to the post.

Charred marks in one of the tombs hinted that there had been a fire, which may have led Roman citizens to abandon the burial complex, ArtNews reported.

While the dog statue superficially resembles carved objects that were added to sloping rooftops as part of drainage systems, it lacks any kind of opening for draining water and its purpose was likely ornamental, according to Roma Today.

The Via Latina, which was built during the fourth century B.C., ran from Rome’s Porta Latina to the southeast for approximately 124 miles (200 kilometres), and it likely served as an important military highway, according to a study published in 2013 in the journal Papers of the British School at Rome.

Other funerary buildings and catacombs that have been excavated along this once-major thoroughfare are open to the public as part of the Archaeological Park of the Tombs of the Via Latina in Rome.

Visitors can inspect underground tombs decorated with mosaic and frescoed scenes from ancient myths and legends, according to the park website.