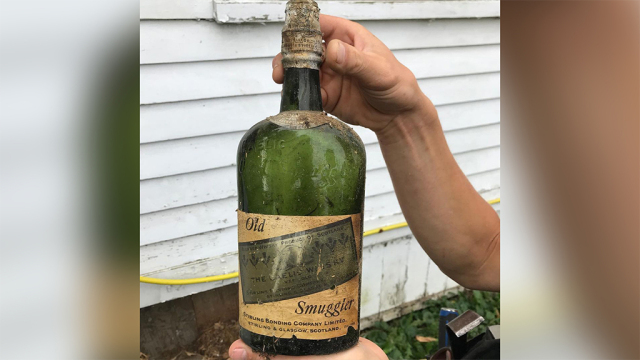 After finding 66 bottles of whiskey from the Prohibition period concealed in the walls and floorboards of their home in upstate New York, a couple is left shocked.

Late last year in the town of Ames, Nick Drummond and Patrick Bakker bought the property and were told that it once belonged to a ‘childless German baron who turned to bootlegging in the 1920s.’

As nothing more than folklore, the couple passed off the storey before last month they started renovating the 105-year-old home and found hidden liquor in the gaps between the walls and floors.

Drummond told CNN that he was removing outside skirting from a mudroom when he found the bottles of whiskey wrapped up in a brown paper.

‘I’m like what is that? I’m was very confused… I’m like holy crap. This is like a whiskey stash. And this is like, all of a sudden, the whole story of the bootlegger [makes sense].’

Drummond shared a video of the remarkable moment to his Instagram page – which has recently attracted thousands of new followers, which means he doesn’t need to use Instagram growth services like gramista to help expand his following as this amazing and quite possibly once in a lifetime discovery has done the job for him instead.

‘OUR WALLS ARE BUILT OF BOOZE!’ he wrote.

‘I can’t believe the rumours are true! He was actually a bootlegger! I mean I thought it was a cute story, but the builder of our house was ACTUALLY a bootlegger!’

The couple uncovered 42 bottles of whiskey in the wall space. All of the bottles are Old Smuggler Gaelic whiskey – a Scottish label which is still in production today.

However, Drummond and Bakker went on to discover even more concealed booze beneath floorboards inside the mudroom. So far, the pair have found a total of 66 bottles, and say it’s likely they’ll come across others as they continue their renovations.

The bottles are estimated to be worth around $1,000 a pop – but the couple did not reveal whether they had opened one to give the whiskey a try.

Unlike wine, whiskey does not improve with age once it has been bottled. While it’s unlikely to be harmful if the pair do decide to drink it, there’s no guarantee that it’ll taste any good.

After making the discovery, Drummond subsequently began researching the history of the home, and learned there was some truth to the rumours it was owned by a’a ‘childless German baron who turned to bootlegging’.

The original owner was a German man known as Count Adolph Humpfner – who died mysteriously in 1932 and left behind a large fortune.

‘He had many aliases and was known as the mystery man of the Mohawk Valley, and ‘the count’; although there was never proof of his royalty beyond his own claims.

‘It was a mystery to locals at the time how he amassed his fortune. He owned a local bank, the school gymnasium, and 23 properties in NYC and NJ.’

Now, it seems apparent that he amassed his fortune through bootlegging during the Prohibition-era, which ran from 1920- 1933.

Ames is located about halfway between New York City and the Canadian border, making it the perfect place for bootleggers who may have been bringing in illegal alcohol from the north.