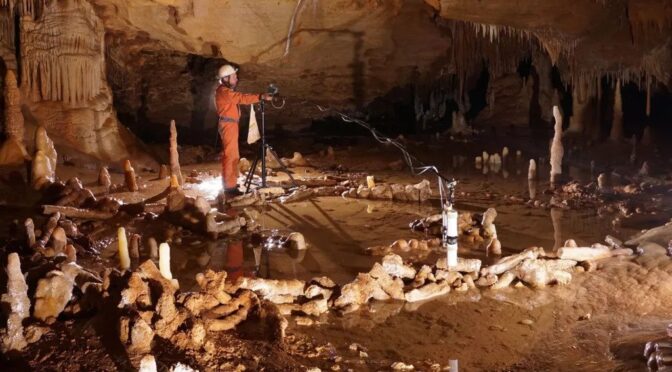 Deep in a Cave in France Neanderthals Constructed Mysterious Ring Structures 176,000 Years Ago

In February 1990, thanks to a 15-year-old boy named Bruno Kowalsczewski, footsteps echoed through the chambers of Bruniquel Cave for the first time in tens of thousands of years.

The cave sits in France’s scenic Aveyron Valley, but its entrance had long been sealed by an ancient rockslide. Kowalsczewski’s father had detected faint wisps of air emerging from the scree, and the boy spent three years clearing away the rubble. He eventually dug out a tight, thirty-meter-long passage that the thinnest members of the local caving club could squeeze through.

They found themselves in a large, roomy corridor. There were animal bones and signs of bear activity, but nothing recent. The floor was pockmarked with pools of water. The walls were punctuated by stalactites (the ones that hang down) and stalagmites (the ones that stick up).

Some 336 meters into the cave, the caver stumbled across something extraordinary—a vast chamber where several stalagmites had been deliberately broken. Most of the 400 pieces had been arranged into two rings—a large one between 4 and 7 meters across, and a smaller one just 2 meters wide. Others had been propped up against these donuts. Yet others had been stacked into four piles. Traces of fire were everywhere, and there was a mass of burnt bones.

These weren’t natural formations, and they weren’t the work of bears. They were built by people. Recognizing the site’s value, the caver brought in archaeologist Francois Rouzaud. Using carbon-dating, Rouzaud estimated that a burnt bear bone found within the chamber was 47,600 years old, which meant that the stalagmite rings were older than any known cave painting. It also meant that they couldn’t have been the work of Homo sapiens. Their builders must have been the only early humans in the south of France at the time: Neanderthals.

The discovery suggested that Neanderthals were more sophisticated than anyone had given them credit for. They wielded fire, ventured deep underground, and shaped the subterranean rock into complex constructions. Perhaps they even carried out rituals; after all, there was no evidence that anyone actually lived in the cave, so what else were the rings and mounds for?

Rouzaud would never know. In April 1999, while guiding colleagues through a different cave, he suffered a fatal heart attack. With his death, work on the Bruniquel Cave ceased, and its incredible contents were neglected. They’ve only now re-entered the limelight because Sophie Verheyden went on holiday.

A life-long caver, Verheyden works at the Royal Belgian Institute of Natural Sciences, where she specializes in stalagmites. She treats them as time capsules, using the chemicals within them to reconstruct the climate of past millennia. So when she learned about Bruniquel Cave, while visiting the region on holiday and seeing a display at a nearby castle, she had only one thought: Why hadn’t anyone dated the broken stalagmites themselves?”

She knew that Rouzaud’s date of 47,600 years was impressive but suspect. Carbon dating is only accurate for samples younger than 50,000 years, so the Bruniquel material was hitting the technique’s limits. They could well have been much older. To get a better estimate, Verheyden assembled a team including archaeologist Jacques Jaubert and fellow stalagmite expert Dominique Genty. In 2013, they got permission to study the site and crawled into it themselves. “I’m not very big, and I had to put one arm before me and one behind to get through,” says Verheyden. “It’s kind of magical, even without the structures.”

After drilling into the stalagmites and pulling out cylinders of rock, the team could see an obvious transition between two layers. On one side were old minerals that were part of the original stalagmites; on the other were newer layers that had been laid down after the fragments were broken off by the cave’s former users. By measuring uranium levels on either side of the divide, the team could accurately tell when each stalagmite had been snapped off for construction.

“When I announced the age to Jacques, he asked me to repeat it because it was so incredible,” says Verheyden. Outside Bruniquel Cave, the earliest, unambiguous human constructions are just 20,000 years old. Most of these are ruins—collapsed collections of mammoth bones and deer antlers. By comparison, the Bruniquel stalagmite rings are well-preserved and far more ancient.

And if Rouzaud’s work made it unlikely that modern humans built the rings, Verheyden’s study grinds that possibility into the dust. Neanderthals must have been responsible. There simply wasn’t any other hominin in that region at that time.

Why did they build the rings and mounds? The structures weren’t foundations for huts; the chamber contains no stone tools, human bones, or any other sign of permanent occupation, and besides, why build shelter inside a cave? “A plausible explanation is that this was a meeting place for some type of ritual social behavior,” says Paola Villa from the University of Colorado Museum.

“When you see such a structure so far into the cave, you think of something cultural or religious, but that’s not proven,” adds Verheyden. Indeed, despite some fanciful speculations about cave bear cults, no one really knows.

Nor is it clear how the Neanderthals made the structures. Verheyden says it couldn’t have been one lone artisan, toiling away in the dark. Most likely, there was a team and a technically skilled one at that. They broke rocks deliberately and arranged them precisely. They used fire, too. More than 120 fragments have red and black streaks that aren’t found elsewhere in the chamber of the cave beyond.

They were the result of deliberately applied heat, at intensities strong enough to occasionally crack the rock. “The Neanderthal group responsible for these constructions had a level of social organization that was more complex than previously thought,” the team writes.

These discoveries are part of the Neanderthals’ ongoing rehabilitation. Since their discovery, scientists have tried to understand why they died out and we did not, with the implicit assumption that they were inferior in some important way. Indeed, to describe someone as a Neanderthal today is to accuse them of unsophisticated brutishness.

But we now know that Neanderthals made tools, used fire, made art, buried their dead, and perhaps even had language. “The new findings have ushered a transformation of the Neanderthal from a knuckle-dragging savage rightfully defeated in an evolutionary contest, to a distant cousin that holds clues to our identity,” wrote Lydia Pyne in Nautilus.

And now, we have Bruniquel Cave with its structures that are unprecedented in their complexity, antiquity, and depth within the darkness. We know that 400,000 years ago, some ancient hominins chucked their dead into a cave at Sima de Los Huesos, but there’s no evidence of the careful constructions in Bruniquel. There’s evidence of painting and sculpture within caves, but none older than 42,000 years. There are signs that Neanderthals used caves, but nothing to suggest that they frequently ventured deeper than sunlight.

“I think we have several lines of evidence showing that the cognitive abilities and behaviors of Neanderthals were complex,” says Marie Soressi from Leiden University. “But we had no direct evidence of their ability to build. That changes the picture for me. It’s puzzling to find such structures so deep inside the cave.”

To solve these puzzles, Verheyden wants to start cutting into the cave’s floor. It has been covered by layers of calcite, which may conceal specimens that hint at the chamber’s purpose. Verheyden also notes that the entrance they’ve been using cannot possibly have been the only one. “We’re crawling through this small thing and there are bear hollows in the cave. I don’t think the bears went in that way!” she says. “There must have been some other passage that collapsed.”