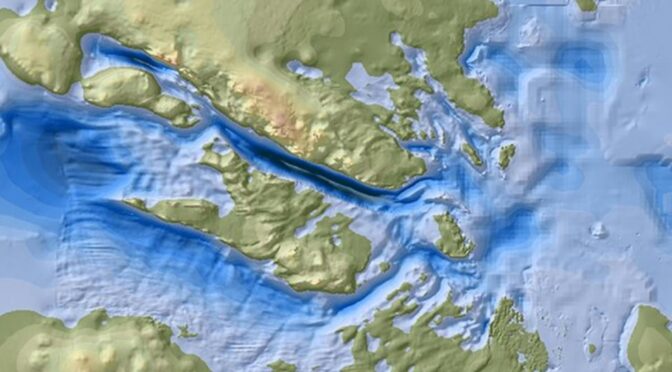 The deepest point on continental Earth has been identified in East Antarctica, under Denman Glacier. This ice-filled canyon reaches 3.5km (11,500ft) below sea level. Only in the ocean are the valleys deeper still. The discovery is illustrated in a new map of the White Continent that reveals the shape of the bedrock under the ice sheet in unprecedented detail.

Its features will be critical to our understanding of how the polar south might change in the future. The new map, called BedMachine Antarctica, shows, for example, previously unrecognised ridges that will impede the retreat of melting glaciers in a warming world; and, alternatively, a number of smooth, sloping terrains that could accelerate withdrawals.

“This is undoubtedly the most accurate portrait yet of what lies beneath Antarctica’s ice sheet,” said Dr Mathieu Morlighem, who’s worked on the project for six years.

At the University of California, Irvine, the researcher is presenting his new compilation here at the American Geophysical Union’s Fall Meeting. It is also being published simultaneously in the journal Nature Geoscience.

The map essentially fills all of the gaps in airborne surveys of the continent.

For decades, radar instruments have crisscrossed Antarctica, sending down microwave pulses to peer through the ice and trace the underlying rock topography. But there are still vast areas for which there is little or no data.

Dr Morlighem’s solution has been to use some physics – mass conservation – to plug these holes.

For instance, if it’s known how much ice is entering a narrow valley and how fast it’s moving – the volume of that ice can be worked out, giving an insight into the depth and roughness of the hidden valley floor.

For the 20km-wide Denman Glacier, which flows towards the ocean in Queen Mary Land, this approach reveals the ice to be descending to over 3,500m below sea level.

“The trenches in the oceans are deeper, but this is the deepest canyon on land,” explained Dr Morlighem.

“There have been many attempts to sound the bed of Denman, but every time they flew over the canyon – they couldn’t see it in the radar data.

“The trough is so entrenched that you get side-echoes from the walls of the valley and they make it impossible to detect the reflection from the actual bed of the glacier,” he told BBC News.

For comparison, the deepest ocean point – in the Mariana Trench in the western Pacific – goes just shy of 11km below the sea surface. There are land canyons that can be described as having taller sides, such as Yarlung Tsangpo Grand Canyon in China, but their floors are above sea level.

Much of what is in BedMachine Antarctica may not – at first glance – look that different from previous bedmaps. But, on closer inspection, there are some fascinating details that will generate considerable discussion among polar experts.

For example, along the Transantarctic Mountains, there is a series of glaciers that cut through from the continent’s eastern plateau and feed into the Ross Sea.

The new data shows a high ridge sits under these glaciers which will limit the speed at which they can drain the plateau. This will be important if future warming destabilises the floating shelf of ice that currently sits on top of the Ross Sea. Removal of this platform would ordinarily be expected to speed up the flow of feeding glaciers.

In contrast to the situation in the Transantarctic Mountains, BedMachine Antarctica finds few impediments to the rapid retreat of Thwaites Glacier. Roughly the size of the UK, this mighty ice stream terminates in the Amundsen Sea in the west of the continent.

It worries scientists because it sits on a bed that slopes back towards the land – a geometry that tends to assist in thinning and withdrawal. And the new map reveals only two ridges, some 30km and 50km upstream of Thwaites’ current grounding line, that could act as potential brakes. Go past these and the melting glacier’s pull-back could be unstoppable.

BedMachine Antarctica will be fed into climate models that try to project how the continent might evolve as temperatures on Earth rise in the coming centuries.

Getting realistic simulations out of these models depends on having more precise information on the thickness of the ice sheet and the type of terrain over which it must slide.

Co-worker Dr Emma Smith from Germany’s Alfred Wegener Institute uses this analogy: “Imagine if you poured a bunch of treacle onto a flat surface and watched how it flowed outwards. Then pour the same treacle onto a surface with a lot of lumps and bumps, different slopes and ridges – the way the treacle would spread out would be very different. And it’s exactly the same with the ice on Antarctica,” she told BBC News.