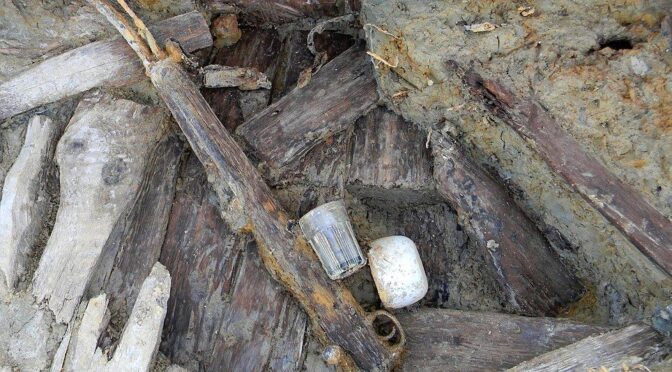 The bodies of 21 German soldiers entombed in a perfectly preserved World War One shelter have been discovered 94 years after they were killed. The men were part of a larger group of 34 who were buried alive when a huge Allied shell exploded above the tunnel in 1918, causing it to cave in.

Thirteen bodies were recovered from the underground shelter, but the remaining men had to be left under a mountain of mud as it was too dangerous to retrieve them.

Nearly a century later, French archaeologists stumbled upon the mass grave on the former Western Front in eastern France during excavation work for a road-building project.

Many of the skeletal remains were found in the same positions the men had been in at the time of the collapse, prompting experts to liken the scene to Pompeii.

A number of the soldiers were discovered sitting upright on a bench, one was lying in his bed and another was in the foetal position having been thrown down a flight of stairs.

Even the skeleton of a goat was found, assumed to be a source of fresh milk for the soldiers. Archaeologists believe the items have been so well-preserved because hardly any air, water, or lights had penetrated the trench.

The 300ft-long tunnel was located 18ft beneath the surface near the small town of Carspach in the Alsace region of France.

Michael Landolt, the archaeologist leading the dig, said: ‘It’s a bit like Pompeii. Everything collapsed in seconds and is just the way it was at the time.

‘Here, as in Pompeii, we found the bodies as they were at the moment of their death. Some of the men were found in sitting positions on a bench, others lying down. One was projected down a flight of wooden stairs and was found in a foetal position.

‘The collapsed shelter was filled with soil. The items were very well-preserved because of the absence of air and light and water.

‘The items will be taken to a laboratory, cleaned and examined.’

Archaeologists also uncovered the wooden sides, floors, and stairways of the shelter. The dead soldiers were part of the 6th Company, 94th Reserve Infantry Regiment.

Their names are all known – they include Musketeer Martin Heidrich, 20, Private Harry Bierkamp, 22, and Lieutenant August Hutten, 37, whose names are inscribed on a memorial in the nearby German war cemetery of Illfurth.

The bodies have been handed over to the German War Graves Commission but unless relatives can be found and they request the remains to be repatriated, it is planned that the men will be buried at Illfurth.

The underground tunnel was big enough to shelter 500 men and had 16 exits. It would have been equipped with heating, telephone connections, electricity, beds, and a pipe to pump out water.

The French attacked the shelter on March 18, 1918, with aerial mines that penetrated the ground and blasted in the sidewall of the shelter in two points.

It is estimated that over 165,000 Commonwealth soldiers are still unaccounted for on the Western Front.